Mr Blair Could Solve The "Cash For Gongs" Scandal By Ridding Britain Of The Menace Of Political Advertising. Who But The Agency Chimps Would Care? 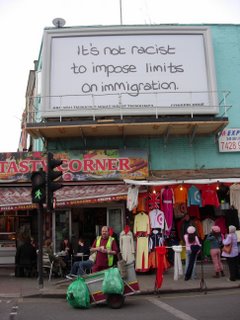 Please excuse me if my tone is unfamiliar. I am just back from the latest seminar in Borders Council's Silver Surfers Initiative, which aims to encourage the withered and the obselete - that is, anyone over 40 - in the ways of modern media. This latest seminar concerned the "semiotics of blogging", and it included several handy hints on how to get one's writing noticed.
Most of these tips can be characterised by a central premise: one should be angry and unreasonable at all times. The blog is to the modern media landscape what the news bulletin was to Mr Peter Finch in the film Network: a place in which the author is under pressure to declare that he (and they are usually gentlemen) is as mad as hell, and not going to take it any more.
Regular readers of this blog will have noticed that I have acquired some jargon. Until recently, I thought the modern media landscape was the Blue Peter garden, designed by Mr Percy Thrower to resemble an Italian sunken garden in 1973, and cruelly vandalised in 1983. Mr Thrower, I recall, declared tearfully that the culprits must have been "mentally ill".
It is, then, with some trepidation that I must announce that this blog identified the Prime Minister's problem with patronage some time before the current "cash for gongs" scandal erupted. On the 5th of March, I noted that Mr Blair had attempted his public relations "comeback" with an appearance on Parkinson, the host of which he had rewarded with a CBE in 2000. This breach is of a different order to granting peerages to the millionaires who secretly funded New Labour's election campaign, but the principle in both cases is one of mutual back-scratching.
As I have resisted all invitations to donate money to the coffers of New Labour, and am in receipt of no offers of peerages, or medals of any sort, I feel I am in a strong position to make an observation which goes to the centre of this row.
So far, all the attention has been on the question of how political parties are funded, when it should really be on the way they spend their money. Both Labour and Conservatives squandered £17m at the last election, much of it on pointless advertisements. The only beneficiaries of such largesse were the performing chimps in red-rimmed spectacles who designed the advertisements, the newspapers which published them, and the companies whose hoardings do so much to make our town- and city-scapes resemble the back pages of a pornographic magazine.
Why not ban political advertising? It is a malign influence, and a visual pollutant, which makes dishonest people richer while demeaning our democracy.
Incidentally, on the question of "gongs", I tend to side with the late Goon, Mr Spike Milligan, who observed of his CBE: "It’s a thing on a string. It’s not really that exquisite. You could get one, you feel, at Marks & Spencer."
Posted by Kirk Elder at 5:16 PM

It shouldn't be too hard in the UK today to maintain the state of "angry and unreasonable" at all times. But it might be a touch tiring, so I wish you luck. I agree with you about political advertising being a blight. It was my instant reaction to the problem of curbing political party spending so that they don't have to indulge in such dodgy practices... Alternatively, how about going the whole hog and having MPs actually sponsored directly by big business. Can't really amount to more comprehensive regulatory capture than we have at present.