With Global Warming, The End Of The World Is Nigh, But That Is No Reason To Go Shopping In Your Unmentionables, Sir

These days, barely a day goes by without a warning about global warming, and its dire effects. As a matter of temperament, I am rather in favour of this: the end, if not exactly nigh, is undoubtedly lurking around the corner with a baseball bat. But I do wonder why - if catastrophe is so obviously imminent - we do nothing about it. There is no moratorium on sales of motor cars, cheap air travel is promoted and airports extended, supermarket food is transported around the planet in refrigerated containers, air-conditioning in the summer is followed by outdoor heaters in the autumn, central heating is the norm, and shop windows and public buildings are illuminated at night, as if to mock the shortage of energy which has left the western world indebted to the Middle East, thus necessitating American intervention in areas of politics about which it knows nothing and cares less.
But, like Ronnie Corbett after an unsucessful experiment with gestalt therapy, I digress. My point is temperatures: like hemlines, they are creeping up. Am I the only person to have noticed that this has happened since our weatherpersons started using Celsius, which I still prefer to call Centigrade, if only because the word sounds like a brand of refrigerator coolant?
I am old enough to remember the effects of decimalisation. In the days of pounds, shillings and pence, things were cheaper, and the population was required to have a working grasp of arithmetic. Decimalisation, and the subsequent introduction of pocket calculators, ended all that. Prices were rounded up, and the British housewife - so used to weighing apples and pears in multiples of twelve - found herself weighed down with halfpenny pieces which were useful only for fraying the pockets of her husband's moleskins. Rampant inflation followed, like children after the gala day pipe band.
The same had happened with temperatures. Centigrade has been with us for 30 years, but most of still like to hear heat expressed in the old money, Fahrenheit. Yesterday, parts of Britain were so hot that there was a shortage of electricity, presumably because of the energy required to refrigerate the nation's beer. The roads in some areas were salted, to stop them melting. Today is hotter yet.
Certainly, this is worrying, but it is not the end of the planet which perturbs me most. In some parts of Midlothian - Dalkeith - the men already wear little more than their underpants during the summer months. I do not care to imagine what will happen if the mercury keeps rising.
Posted by Kirk Elder at 11:02 AM 4 comments: 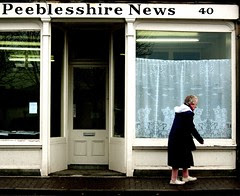 Peeblesshire News
Originally uploaded by Herschell Hershey.
My friend, Mr Hershey, has captured this image of Peebles at its most dynamic. I am not technically-minded, but I am assured that he used a very fast shutter speed to capture the hurly-burly. Even so, I detect a slight blurring around the lady's feet.
Posted by Kirk Elder at 1:00 PM 5 comments:

Mr Jeremy Paxman, That Irksome Scunner Of The Scots, Drives A Battered Vauxhall Astra Into The War On Neds

Further evidence - as if any were needed - of the ineffectiveness of the War on Neds has been provided by BBC2's Newsnight. The programme drove a Vauxhall Astra around Scotland festooned with the flag of St George, as part of a serious investigation into the problem of anti-English racism. (Translation for readers in Caledonia: In an attempt to have some knockabout fun with the Jocks, a reporter was sent North with a mission to be abused).
The experiment was successful. Somewhere in the East End of Glasgow, a gang of neds set upon the parked Astra, tearing its flags off, jumping on the bonnet, and smashing the windscreen.
Last night, in Newsnight's second report into this incident, that Scunner of the Scots, Mr Jeremy Paxman, asked one of the people in the SNP who is not Mr Alex Salmond whether the car would have been vandalised if it had been decorated with the flag of Trinidad and Tobago. I would like to be able to report the reply of the SNP chump, but I decided that my life would be more fulfilled if I turned off the television and took an overdose of Lithium instead.
But what, really, did the report prove? At most, it showed that if a television crew drives past a colony of neds in a ridiculous vehicle and then leaves said vehicle abandoned in the street, it will be attacked. One does not need to be Sir David Attenborough to predict this; a similar effect could be observed by leaving a banana wagon untended in the middle of Blair Drummond safari park, if the park has gibbons, which I suspect it does not. But the link with racism is tenuous. The violence is territorial.
I had a similar experience several years ago, when working on a community drama Mr James Hogg's Confessions of a Justified Sinner. The dress-rehearsal was almost complete - we were working our way through the final scene, in which Mr Hogg's death by hiccups was rendered as a honky tonk anthem, complete with yodeling and pedal steel guitar - when I became aware of a commotion in the street. Naturally, I waited until the final chorus was sung before venturing outside the Pilton Triangle to investigate. At first I could see nothing wrong. The scheme was dark and quiet, apart from the pack of dogs running round a burning police car. I drove home relieved, allowing myself a small yodel of satisfaction as I motored past the Rizla Garage at Crewe Toll. But in the morning, as I clambered into my vehicle, I noticed that someone had drawn on the bonnet a cartoon of an erect male member in the moment of ejaculation.
It is difficult to say what was more embarrassing: ignoring the graffito, or trying to scrub it off. But I do know that I got some funny looks at the traffic lights, and that if I had parked my obscenely-decorated Morris Minor anywhere in the New Town it would have towed away, crushed, and sold to the Scottish National Gallery of Modern Art as a symbol of moral depravity.
Posted by Kirk Elder at 9:36 AM 6 comments: