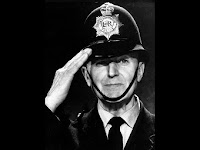 I was intrigued to note the comments from the Shadow Home Secretary, Mr Chris Grayling, comparing the United Kingdom to the television series, The Wire. I understand that Mr Grayling has form in this regard, having previously compared life in this sceptred isle to the Channel 4 drama, Shameless, and also to the Jeremy Kyle show.
Now, it is reassuring to note that Mr Grayling takes such an active interest in television, but I do wonder about his logic. Unlike the front bench of the Conservative Party, I have not watched The Wire, but I have read enough about it to understand that it portrays the state of lawlessness which exists in Baltimore. I understand, also, that the Baltimore which is depicted in the drama is far worse than is likely to be found in even the worst of British urban environments, though I confess I felt uneasy when trying to buy a fly cemetery in Dunbar recently, after a bracing walk on Belhaven sands.
Similarly, I have not seen Shameless, or Mr Kyle, but I know them to be bracing in their assessment of our national life. Yet all are popular, which may be why Mr Grayling felt the urge to cite them in his speeches.
The truth is, real life is nothing like television, and never has been. This weekend, Edinburgh will be occupied by a linen-clad army of nincompoops, as the Guardian-sponsored International Television Festival lays siege to the Conference Centre, and the bar of the George Hotel. Take a walk down Morrison Street on Saturday, and you will see that television people are not like the rest of us. They are peculiarly self-satisfied, which is odd, given the dire state of television. I have attended this festival in the past, when there were vague plans to turn me into a television chef, but I consider myself fortunate that Mince With Everything never got off the drawing board. (Over a glass of warm ginger ale and a piece of haggis pakora, I was informed that I was sexually and demographically unattractive, which was reassuring).
My brief experience of the (non)commissioning process demonstrated that the television is a patronising industry. It is made by idiots, for idiots, and continues to prosper because some of us are idiotic enough to tune in. Where does the intelligent viewer find succour in today’s schedules? Tonight’s highlight is the return to the BBC of Shooting Stars, in which Mr Vic Reeves (not, I understand, his real name) introduces a new item called “Celebrities Disguised As Hitler”. I am not sure how much of my licence fee went into funding that little item, but it was too much, and I would like it back, by return of post, with some compensation for my embarrassment.
But, like Ronnie Corbett pursued by an angry ostrich across Gullane Bents, I digress. My point is the poverty of metaphor which has overtaken the Conservative Party. Why do they insist on comparing everything to television? Have they not read a book? I would suggest that if they want to be alarmist, and I fear that they do, they might start with the Old Testament, particularly Deuteronomy 19. They will find every horror they need in there, and more.
Meanwhile, I will light a candle for Dixon of Dock Green, and dream gently.
Posted by Kirk Elder at 3:52 PM 4 comments:

The BBC's Deracination Of Dennis The Menace Is Not Political Correctness Gone Rife. It Is Much Worse Than That

It was with some alarm that I read the news that DC Thomson’s imp of the perverse, Dennis the Menace, is to be “toned down” in order to suit the requirements of the BBC’s children’s channel, CBBC. Dennis’s catapult is to be banished, and he will no longer be allowed to pick on Walter the Softie, for fear that this might encourage “gay-bashing”. Even Dennis’s horrible dog, Gnasher, will be given a personality transplant. This, according to company which makes the series, Red Kite, will help Dennis appeal to the “iPod generation”.
Now, there are many ways in which to take offence at this news. Most obviously, this appears to be a case of what my old editor at the Hootsmon – who was actually rather young – used to call “political correctness gone rife”. (She was a creature of the Daily Mail, where things are always going rife.) I dare say that in this case, it is true. The BBC stands accused of not encouraging youngsters to thump each other. When children shoot each other’s eyes out with catapults, the Director General, Mr Mark Thomson, will be able to look himself in the mirror, take a drink from his £400,000 water cooler, and consider his conscience clear. Of course, now that Dennis has been equipped with a skateboard – in place, I assume, of his “cartie” – the BBC has opened itself up to the charge of encouraging knee and head injuries to children, not to mention endangering the lives of innocent pedestrians. One need only take a walk in Edinburgh’s Festival Square – also known, by the writer Mr Neal Ascherson, as Hypothermiaplatz – to understand that a teenager on a skateboard is more dangerous than a toddler with a “cattie”.
As it happens, I once spent a day in the Dundee offices of the Beano, and found it to be a most agreeable workplace. It was a small room, with two artists facing the comic’s editor, Mr Euan Kerr, whose style was, I think it fair to say, “hands-off”. There was no conversation in the room, and precious little merriment, because the art of being funny is very serious business. Mostly, the artists stared out of the window, awaiting inspiration. During my stay, this involved the appearance in the street of a child with a pump-action water pistol, which was immediately incorporated into the next Dennis the Menace storyline.
I am pleased to see that Mr Kerr is still in his post – which must make him one of the the longest-serving editors in Scotland – and I am confident that he will do all he can to preserve the innocent essence of Dennis in a grim world. (Though I note, with some horror, that Desperate Dan has traded his Colt .45 for a water pistol. I trust he will not be swapping his cow pies for a rocket salad and a glass of Evian: that would not be Cowtown).
Leaving the arguments about political correctness aside, I remain concerned for Dennis and Gnasher. As a thespian, I am a trained observer of character. Take away Dennis’s aggression, and his tendency to violence, and what remains? Will the infants of the iPod generation, their veins running orange with Sunny D, be satisfied by a tousle-haired twerp in a stripy jumper? Dennis, pour soul, will be adrift on a sea of indecision. What, he will be asking with every vacant twitch of his catapult hand, is my motivation? And what of poor Walter? If being a softie is no longer an acceptable ambition, what should he do? He cannot read books, since books are to children what unicorns are to zoologists – a comforting rumour, never to be encountered in real life. Should he attempt to befriend the beastly Dennis, and wallow in the absence of threats to his person? Surely not.
Besides, I do not understand why thumping softies has anything to do with “gay-bashing”. To suggest that it does is to imply that homosexuals are weak, and that, I think, is called homophobia.
Posted by Kirk Elder at 2:56 PM 3 comments: