The Festive Season Has Become A Scrummage Over A Cheap Vest, And Is Best Avoided

I do not believe in December, a month blighted by Christmas. In the days of my childhood it was dark and cold, and nature was dormant. Nothing happened, save the frost, and the mist, and the general sense of drear. In Scotland, Christmas was noted quietly, without fuss, but the Bacchanalian excesses were saved for the ominous cacophony of the bells on Hogmanay,after which there were whisky and kisses and tears, though not always in that order. My mother, Mrs Elder, (or Ma'am) used to refer to the chimes of midnight as Hell's Bells, but she averted any ill-consequences by hosing the house with bleach and removing to the bunker any item which might have been construed as decadent. My father, Mr Elder, often came into this category, not least because of his habit of filling "The Mecca" (an earthenware hot water bottle made by Grimwades Ltd, of England) with advocaat in order to fend off the cold.
In recent years, however, the devils of commerce have hijacked the whole festive business. Christmas begins in September and only stops with the opening of the Jenners sale, though that is less of an event than it used to be; being reduced - since the takeover by Frasers - to a scrummage over a cheap vest.
As it is now all-but impossible to ignore the siren call of shopping, I have taken to hibernating during the Christmas period. Generally, I take to my bed at the first sighting of an advertisement for Terry's unpleasant Chocolate Oranges, and re-emerge when the scrabbling of urban foxes at the door grows insistent - a sure sign that the streets are littered with the discarded carcasses of force-fed bubblyjock.
I am awake now, but not yet awakened. To nurse myself back to sentience, I have been reading the poems of Mr Edwin Muir. Today, I read Scotland's Winter, and was reminded, for some reason, of the Senior Retainer, Mr Jack McConnell, and his colleagues in that Council of Despair, the Holyrood parliament.
But they, the powerless dead,
Listening can hear no more
Than a hard tapping on the floor
A little overhead
Of common heels that do not know
Whence they come or where they go
And are content
With their poor frozen life and shallow banishment.
Posted by Kirk Elder at 12:36 PM 3 comments:

In The Heat Of War, The Cliche Is The Enemy, So It Is Time To Disarm Those Who Talk Of Silver Bullets

Once, when I was employed in an advisory capacity at Scotland's Notional Newspaper, The Scotsman, I happened to mention to a young reporter that her story was full of cliches. It was, to coin a phrase, jam-packed with prefabricated language. The wastepaper bin at the Hallmark card factory would have contained less weary verbiage.
But the reporter was unabashed. "Cliches become cliches," she reprimanded me, "because they're true."
At the end of the day, when all is said and done, I fear she was hitting the nail on the head, and - as if to prove it - she went on to enjoy a glittering career.
Perhaps she was right to be unapologetic. Journalism is an ecological industry concerned with the recycling of old words. But the use of cliches still rankles. This afternoon, on BBC Radio 4's The World at One, I heard one of the most annoying examples, when someone - it does not matter who - noted that: "There is no silver bullet to end the violence in Iraq."
What is this "silver bullet", and how does it have the capacity to end war? Is it fired from a silver gun by the Lone Ranger? Or is it related the "magic bullet" often mentioned by whey-faced apologists for chaos, but which is actually derived from the conspiracy theories about the assassination of President John F Kennedy?
The two terms are used interchangeably, their purpose being to avoid the less poetic statement: "I don't know". But really, all they do is add confusion, particularly when the subject is war. I am told that American tank crews in the first Gulf War used the nickname "silver bullet" for sabot cannon shells, due to their ability to destroy Iraqi tanks with a single shot. So the sentence, "there is no silver bullet to end the violence in Iraq" may be true, but in a different way than would be assumed by a casual listener.
I realise, of course, that the silver bullet has a long history, and is invaluable when one is attacked by werewolves or vampires, though some would say that a wooden stake is a more reliable implement in the latter case. When in doubt, one should merely avoid Midlothian.
Posted by Kirk Elder at 4:51 PM 4 comments: 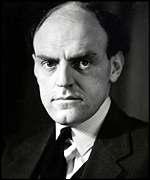 This morning on BBC Radio Four's Desert Island Discs, I heard Ms Kirsty Young use the word "chavs" without irony or apology. Moments later, a news announcer read a report which included the phrase "economic no-brainer"; a term which should never be used, unless in connection with Lord (Norman) Lamont.
Another two daisies on the grave of Lord Reith.
Posted by Kirk Elder at 10:01 AM 1 comment: