Prince William's Wedding Is An Act Of Great Optimism. He Must Hope He Is Heir Only To His Father's Hair, And Not His Matrimonial Tricycle 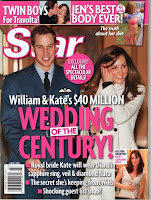 The news that HRH Prince William is to marry his lady friend, Miss Kate Middleton, is, of course, to be welcomed. One must always accept tokens of optimism as they are dispensed, and there can be no more optimistic act than for the heir to the heir to the throne - who is also heir to the heir's hair, or absence of same - proposing to enter wedlock with a civilian, and "sealing the deal" by producing his mother's ring.
The point does not need to be stressed, but the marriage between the Waleses, Charles and Diana, was nobody's idea of a dream. To borrow the modern vernacular, one might almost say it was a car-crash of a relationship, if such an observation was not in obvious bad taste. But, viewed with cruel hindsight, it was an advertisement for the uselessness of arranged marriages, and a danger to the mythology of the Crown, which relies on a cocktail of magic and deference for its continued survival. One might ask now, what the Prince of Wales thought he was doing when he condemned the innocent Diana to her dreadful fate? Presumably, when he mounted his matrimonial tricycle, he thought that the usual rules of the road applied, wherein the foibles of the posh are forgiven on account of their splendid manners. (See also Mr Julian Fellowes' contemporary riot of forelock-tugging, Downton Abbey).
I know nothing of the relationship between HRH Prince William, and Miss Kate Middleton, and while I suspect the size of this void will be greatly increased by speculative verbiage over the next six months, I fully expect to know even less of the reality of their lives by the time they make it along the aisle. I do wonder, though, whether they will be forced to take note of the tenor of the times, and celebrate their nuptials with a cut-price ceremony, perhaps in hired ermine and recycled lace to match the second-hand ring, or whether Royal tradition will dictate that the poor huddled masses require an escapist binge to compensate for the absence of paid employment, benefits, homes to live in, or legal aid to fight over the custody of the dog-on-a-string when their hasty and probably fraudulent relationships fall apart due to the unforeseen pressures of the above. I am no public relations guru, but I tend towards the suggestion that unrestrained opulence would be a rather bold strategy for these straitened times. Perhaps, as a means of symbolically cutting the Royal cloth, the beano could be subsidised by a temporary tax on Duchy Originals' Velvety Beetroot Soup.
Many have commented on the fact that the broader culture seems to be locked in a strange tribute to the 1980s, with a careless Conservative government promoting inequality, and leaving the Falkland Islands undefended in the hope that the Argies will invade. I am not really in a position to judge this observation, as Peebles is locked in a permanent state of 1962, and is all the better for it.
In the meantime, I wish the couple well. Royal weddings are a mug's game, and I trust that this marriage will last long enough to be toasted in a ceremonial souvenir, before its inevitable descent into junk shop, and on to historical curiosity.
Posted by Kirk Elder at 5:49 PM 3 comments: