A Message From Our Sponsor: Click On The Advertisement Above To Keep The Peebles Showboaters in Butter Biscuits


As a man whose upbringing would have struck Pastor John Calvin as unduly joyless, I need no reminding of the impossibility of entering into a pact with the Devil. Indeed, this very afternoon, as part of the Peebles Showboaters’ Theology And Cinema course of which I am tutor, I watched The Masque Of The Red Death, in which a Satanic, and yet unusually restrained Mr Vincent Price attempts just such an act, only to discover that - while it may be possible to hold dominion over a spooky castle, and to have among your servants an impetuous dwarf and a tiny dancer - diplomacy with the Lord of Flies is a tricky prospect. Yet, as you my have noted, this “blog” hosts advertising from the information superweasels, Google. You may click on the advertisement above, and in so doing keep the Peebles Showboaters in butter biscuits. (In the last six months, our earnings have totalled $1.86; a fair return for my labours, and roughly equivalent to the hourly rate I used to receive for howking tatties in the frost-hardened dreels of East Lothian.) I have no idea how Google selects these advertisements, but they are usually complimentary. In recent weeks, the advertisements on this page have been for crematoria, wreaths, and industrial-strength pan drops, which is a slightly depressing summary of my interests, but realistic none the less. But I was intrigued, the other day, to see a small advertisement for “Scottish Teeth”. It had disappeared by the time I tried to investigate it, but it did cause me to think. It has never been harder to find an NHS dentist; has the health service now taken to selling the remnants of its handiwork as souvenirs?
Posted by Kirk Elder at 12:52 PM 4 comments:

Mr David Cameron May Be A Dab Hand With A Frisbee, But His Lusty Displays Will Not Help Beat Britain's Economic Woes 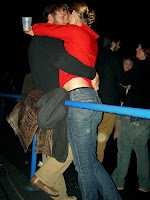 I am not in the habit of reading The Guardian, as I feel patronised enough in everyday life without having to pay 80p for the privilege. However, the paper was foisted on me by an underfed student as I made my way to an off-Fringe performance of The Gulag Archipelago on Ice at the Tartan Club in Edinburgh’s Fountainbridge, and my resistance was weak.
From what I can tell, the newspaper of the liberal-leaning North London intelligentsia is in the midst of a schoolgirl crush, and is counting the days until the matter of Mr Blair’s succession can be properly settled in a battle between two fresh-faced clones of the former Prime Minister, these being Mr David Cameron, who is pretending not to be a Conservative, and Mr David Miliband, who isn’t quite sure what he is pretending not to be, while giving every impression of being an opponent of the current Prime Minister, Mr Gordon Brown.
Mr Brown does not enjoy a good press or, indeed, anything very much, but his recent faux pas include wearing a tweedy jacket on his holidays and looking ill-at-ease with the notion of a “photocall”, whilst his main opponent, Mr Cameron was happy to play with his Frisbee in public. It is, I realise, an unfashionable opinion, but I have never been of the opinion that skill with a Frisbee was an important tool in managing a global economic downturn. Indeed, my experience of Frisbees is limited to the observation that they appeal to the listless and the loutish, and to dogs.
Mr Cameron also took time during his pretend-holiday – a break which he is sandwiching between two less-reported foreign jaunts – to make love to his wife on the sands. (I use the term in its traditional sense). His lack of manners was matched only by his immodesty. This saucy display had all the verisimilitude of a photo-love story in Jackie magazine, but it has been indulged by the English electorate, which seems happy that its potential leaders should aspire not to intellectual clarity, or honesty, but to a hammy approximation of lust.
But I digress. My point was The Guardian, and its lengthy examination of the politics of kissing. The English, apparently, have eschewed the manly handshake, and now brush cheeks – or worse – with perfect strangers at the slightest invitation. There is no etiquette for this, though behavioural expert Ms Judi James suggests kissing the right cheek first, and then the left, whilst always keeping a hand on the torso.
Happily, I can confirm that such lewd behaviour has yet to reach Peebles. In Peebles, kissing is permitted at high times and holidays, but rarely indulged. In business, a handshake is considered “showy”, and there is never any need for two men to hug, let alone kiss. I have been to weddings where the bride and groom celebrated their union with nothing more than a weary nod. This may not be romantic, but as my mother, Mrs Elder (or Ma’am), used to say before strapping me to the ironing board of an evening, “romance never skinned a rabbit nor pressed your father’s breeks”.
Posted by Kirk Elder at 3:23 PM 4 comments: