Mr Russell Brand And Mr Jonathan Ross May Be Idiots, But They Should Be Spared The Pitch-forks Of Synthetic Ire 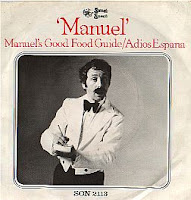 Much as I have enjoyed my visits to the Hammer House of Horror, I have always been suspicious of witch hunts. Perhaps because I have lived in Peebles for so long, I have an inbuilt scepticism of the pitchfork-wielding mob. Indeed, on more than one occasion I have had to seek sanctuary in the fatty nave of Big Eb’s chip shop, while the hoodlums did their worst. On such occasions, I tend to seek solace in a white pudding.
What, then, are we to make of the strange case of Mr Jonathan Ross and Mr Russell Brand? To be clear: I do not hold a candle for either man. Mr Ross is a boor and a bore, and a poor replacement for Sir Michael Parkinson. His comedy comprises single-entendres, many of them homo-erotic, and he gives the impression that he would rather be at home, addressing his mirror. Or mirrors.
It is not possible to identify the moment when Mr Ross’s career as a talk-show host reached its nadir, as he redefines the term every week, but there was a grotesque familiarity to his recent “interview” with the angry chef, Mr Gordon Ramsay. Mr Ramsay is a true child of 21st century television. He speaks in swear-words, and has the manners of a bully. I understand he was trained by the infamous manager of Glasgow Rangers football club, Mr Jock Wallace, whose party-piece was to lift his young charges up by the ears, before bashing them.
Mr Ramsay and Mr Ross have much in common, not least wealth and contempt for their audience. They are spivs: salesmen with a gift for selling themselves. When Mr Ramsay met Mr Ross recently, he showed him how to cook scrambled eggs, a simple task made unnecessarily complicated by the addition of crème fraiche and the shavings of Mr Ramsay’s truffle. (As any chef should know, glutamic acid and eggs are not compatible, except to pigs).
Reithian it was not. It was an embarrassing spectacle based on two simple rich men competing to underestimate the intelligence of their audience.
About Mr Brand, I know less, but the little I know is discouraging enough. He dresses like a dandy of the underworld, from a time before combs, and speaks like a Dickensian urchin who is having trouble digesting a dictionary. What he is for, I could not say, but it is a fair bet that the Reithian strictures of educating and informing do not fall into his purview.
We now know that Mr Ross and Mr Brand contrived to insult Mr Andrew Sachs, the actor who played Manuel in Fawlty Towers, and whose family fled the persecution of the Nazis in 1938. Mr Sachs has behaved with some dignity in this affair, possibly because he understands the difference between nonsense and a crisis.
There have been consequences: Mr Brand has resigned from his Radio 2 show. Mr Ross has sent flowers and an apology, and has been suspended for three months without pay. (Nevertheless, I fear he will not be going hungry this Christmas). The controller of Radio 2, Ms Lesley Douglas, has walked the plank.
That, really, should be enough. Yet the world, led by the Prime Minister, the leader of the opposition, and the Daily Mail – a triumvirate who are, on occasion, oddly indistinguishable - has behaved like the bellows in a firestorm of synthetic outrage, in which only the censure of the BBC, the abolition of the licence fee, and the re-imposition of National Service for disc jockeys will quell the rage. Oddly, such is the masochism of the Corporation that the BBC has itself been complicit in this process. The news bulletins are full of self-flagellation, which makes a change from the end of the world economy as we know it, but is far from edifying.
Now is the time for a dose of truth. We must all sober up. The BBC is flawed. It is staffed by twits from Oxbridge whose expensive education has at least allowed them to feel guilty about their privilege. There are many horrors on the Corporation’s airwaves, only some of them evoked by the words “and now, Midweek with Libby Purves”. But it is not ITV. And in difficult times, small mercies should be cherished.
Posted by Kirk Elder at 5:21 PM 4 comments: