The Sagging Gusset Of Mr Jeremy Paxman Was A Distraction On Newsnight, But The Newscaster Is Not Alone In His Discomfiture 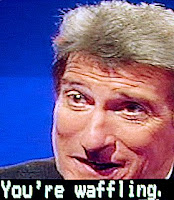 It is with a degree of shame and guilt that I admit this: I have spent much of the week in anguished contemplation of Mr Jeremy Paxman's unmentionables. Mr Paxman - so often the voice of irascible unreason on BBC2's Newsnight - made an important contribution to the national debate when he criticised the quality of the undergarments and socks at Marks and Spencer's. I may be paraphrasing slightly - or possibly suffering from post-traumatic stress disorder - but Mr Paxman's ventures into M&S have led to a sagging gusset, and a protruding big toe (NB: this is not a metaphor). No wonder he often looks as if he is chewing a wasp.
Mr Paxman has my sympathies. For years now, my unmentionables have been imperilled by the quality of intimate tailoring at this high street institution. The men's underwear department has always been a disagreeable place, rather like a painting of a rummage sale by Mrs Beryl Cook. The customers are mostly women, tugging and pawing at the Y-Fronts, while stray male customers hover in embarrassed clusters by the slip-on shoes. Sometimes these women will have their husbands in attendance, as if attached by an invisible leash, and the conversation will run along these lines: "These are the ones you like, aren't they?" A pair of briefs similar to the trunks worn by Mr Mark Spitz in the 1972 Olympic Games will be held aloft. "Naw. I mean... aye."
In recent years, men's unmentionables have attracted the attention of the fashion industry, with disastrous results. It is no longer enough to give a gentleman the choice between Y-Fronts and boxer shorts. Now, these garments come in all manner of space age fabrics, and in shapes that have not been seen since the demise of the wrestling on World Of Sport. I still suffer twangs of distress from the "Wonderpants" I was asked to "road-test" for Scotland's Notional Newspaper some years ago. These were made from a stretch fabric which appeared to include no natural fibres, and were designed to "shape and enhance" a gentleman's undercarriage. Now, decency prohibits me from commenting in detail on this concept, but I found it offensive and misguided. I have spent a lifetime avoiding situations in which I might be seen in my underwear, and I see no reason to change. Admittedly, on my rare forays into the swimming baths, I have seen things that would have frightened Colonel Kurtz - Edinburgh's Commonwealth Pool is particularly bad for this - but it was obvious immediately that I was not, and would never be, a Wonderpants man.
Aside from the discomfort, I could not abide the suggestion that my moleskins were, at any moment, about to ignite.
Posted by Kirk Elder at 11:42 AM 5 comments: