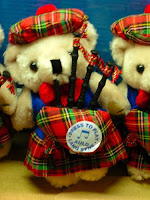 Alas, and indeed, alack, in this diffident spring of earthquakes and lavender revolutions and supermoons and Cruise missiles raining down on the close personal friends of Mr George 'You Can Call Me The Cat' Galloway, an election to the Scottish parliament is underway. You may have detected the signs, though this might more easily be done with the giant stethoscopes they used to employ inside those outsized golf balls in the countryside to eavesdrop on the chatter of Cosmonauts.
Much is at stake. Not, of course, the destiny of the nation. All the parties in the Palatul Parlamentului are in broad agreement about everything, and all are agreed that in order for the parliament to prosper, they must pretend to disagree. Broadly speaking, all are in favour of public services being free, or subsidised by the broader UK economy, though this arrangement is excused in nationalist circles by the suggestion that the books can be balanced by taxing the profits made by multinational oil companies in the 1970s. All subscribe to a mythical vision of Scotland, in which a soft-left consensus prevails, and all are mystified and powerless to deal with any outbreaks of inconvenience which might undermine that image, such as sectarian prejudice. All are in favour of single faith schools, which might be a contradiction in a less generous nation.
There are, of course, marginal differences. The Nationalists want to do something about the availability of cheap alcohol, but Labour does not, for it fears the loss of its block-vote of Buckfast drinkers in the West. The nationalists, meanwhile, take a benign view on the release of convicted international terrorists and the business acumen of that great exiled Scot, Mr Donald Trump, albeit at great cost to the pink-footed geese of Foveran Links. This, I think, is due to the essential optimism of the Senior Retainer, Mr Salmond, for a lesser politician would surely have been dented by the disappearance of the "arc of prosperity" his party hoped to shelter under, which turned into a potless rainbow with the bankruptcy of Ireland and Iceland at roughly the same moment Scotland's reputation as a country of sound banking was being traduced by that croupier of the RBS supercasino, Sir Fred Goodwin, who should not be called a banker unless he is within the sound of the Bow Bells.
Superficially, Scotland must be prospering, for its people have never been so fat, nor so overdressed. Even Auld Reekie, for so long the capital of Calvinist dourness and hop-flavoured air, is like a satellite of Glasgow's wet West End these days, full of chubby millions with tandoori tans and the kind of tailoring that is designed to look obvious, rather than appropriate. What I wonder, is Mr Salmond's plan to tackle obesity, other than making sure he eats all the custard creams himself?
Posted by Kirk Elder at 4:29 PM 6 comments: