As The Ceiling of the Scottish Parliament Is Falling Down, Like The Sky In Chicken Little, Shouldn't We Sell Tickets And Introduce Performing Animals? 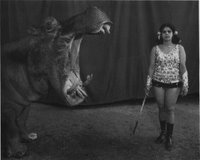 It is, of course, regrettable that our glorious leaders should be made temporarily homeless by the danger of falling beams from the ceiling of the Palatul Poporului in Holyrood. Without wishing to denegrate our elected representatives, aren't they being a bit soft, with their suggestion that the parliament be sited elsewhere until the building is made structurally sound? Our parliamentary debates are, as a rule, less exciting than a performance by Major Roberts Madras State Circus, and involve a far smaller risk of being mauled to death by a drugged lion. Could a safety net not be attached to the roof, to catch falling beams? If, at the same time, the opportunity was taken to introduce a few acrobats and performing elephants, our parliamentary affairs would be much enhanced.
Posted by Kirk Elder at 11:42 AM