Mr Alex Salmond Has Avoided Banana Skins In His First 100 Days: No Mean Feat In A Parliament Of Pygmies 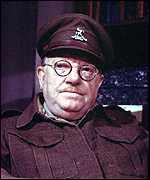 The other morning, when the Senior Retainer, Mr Alex Salmond, was celebrating his first 100 days in office, I rose early and checked my reflection in the mirror. Steadying myself from the disappointment, I washed my face, before mashing the tea to the sound of Mr Edward Stourton mashing his vowels on BBC Radio 4's Today programme. (Mr Stourton reminds me of Sgt Wilson in Dad's Army, while in his irascibility Mr John Humphrys [above, right] grows increasingly like Captain Mainwaring). The weather resembled a nuclear winter, as usual. I could hear sirens, and the distant bleat of a car alarm above the thrum of the commuter engines rolling insolently towards Edinburgh from the executive bantustans . There was milk in the fridge, but it tasted of water and industry, not cream. It did not feel like the early days of a better nation. It felt like another day with nothing to do.
By common consensus, Mr Salmond has had a good 100 days. He has avoided banana skins, and has looked more presidential than his predecessor, Mr McConnell. He was aided in this by the fact that Mr McConnell always resembled a town councillor who - on successfully organising a fete - found himself in receipt of the keys to the tuck shop, and was subsequently paralysed by the responsibility. My sources within the Executive tell me that on gaining office, Mr McConnell instructed his officials to dream up measures which would transform the country, but cost nothing. After a week of this dreaming, he amended his plan to something less ambitious: doing nothing which would transform the country.
Mr Salmond, by contrast, looks like a politician. He is, and remains, a graduate of the Big School, Westminster, and is thus an accomplished practitioner of wheezy rhetoric. Thus, even when he is doing nothing, he is able to look as if he is shaping the destiny of the nation (see the "national conversation").
The politician who defined the concept of "the first 100 days" was President Roosevelt, who came to power in the USA at a time of fear, panic and economic ruin. He avoided a collapse in the banking system by declaring a bank holiday, and told the electorate that the only thing it had to fear was fear itself. (This, palpably, was nonsense). Nevertheless, his confidence is credited with saving the capitalist system from oblivion, and he introduced the New Deal, was a big deal for some, and a smaller deal than it appeared for others.
Mr Salmond has made Scotland feel good about itself, and has launched another period of national self-examination. For this, he has been treated as a guru, when, by any rational examination, he is merely a good politician in a parliament of pygmies (with all due respect to the small people of Central Africa).
Posted by Kirk Elder at 10:23 AM 1 comment:

Scotland Gets The Culture It Deserves
Originally uploaded by Herschell Hershey.
I will admit that, as a resident of Peebles, I am rarely in a position to take the pulse of the national polity. Peebles exists in a state that is like 1955, with slightly more traffic and heavier rain, and young people who advertise their ignorance by playing terrible music on their mobile telephones. But, apart from this, everything is fine. Until approximately 1979, Edinburgh was like this. But somehow, over the last three decades, the city has become a true European capital; which means that its streets are thronging with hen and stag parties, the bars never close, and the holes in the ground which once made the city centre such a metaphor for Scottish dentistry have been filled with glass incisors, run by banks. I never thought I would be nostalgic for the political winter of Mr Alex "Red Eck" Wood, who ran the place like a socialist outpost of Ruritania, even decorating Princes Street with hideous banners which read, with a reassuring lack of poetry, "Improving Services, Creating Jobs". This was at a time when services could not be said to be improving, and jobs were scarce.
However, while on festival duties in the High Street, I chanced upon the council's current slogan: "Inspiring Capital". I understand there is a pun involved - which is bad enough - but is it really the case that the best that can be said for the great city by the Forth is that is excites money?
I have more to say, but first I must lie down. In the meantime, here is a drummer.
Posted by Kirk Elder at 2:10 PM 1 comment: 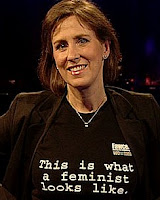 This morning, I was canvassed by a "think tank" on the subject of the Scottish Six, which has been made a priority by the Senior Retainer, Mr Alex Salmond. Mr Salmond, I understand, is in favour of a national news bulletin, edited and produced in Scotland. One may speculate about his motives, and it would surely be too cynical to suggest that he is in favour of Scotch News because it would easier for him to get onto it, even though he remains a Westminster MP, and is thus in the happy position of decrying the institution which pays one of his salaries. (He doesn't much like the Scottish parliament either, though he seems to be getting used to it.)
I understand why the Scotch News is a matter of perennial debate: Scottish journalists would obviously be happy to have more comfortable swivel chairs, pens that light up in the dark, and reinforced trilbies for anxious reports from the rooftops of Holiday Inns in war zones, in which they would tell us that the situation remained tense, but bearable, as the hotel bar stayed open late.
But do we really need Scotch News? I would rather listen to pigs being electrocuted than tune in to Good Morning Scotland, which is an international bulletin in tartan slippers. And much as I admire Ms Jackie Bird, I fear that newsreading is one of the occupations in which the nation's best talent has gone South. Newsnight's Mr Gavin Esler is a fine and sober presence, and Ms Kirsty Wark - though she talks as if her wallies have been gummed together with the grouty remnants of a Tunnock's Caramel Wafer - has the authority, and the dimmed beauty of Miss Jean Brodie.
But the Scottish news programmes are beyond help. Is it, I wonder, because as a nation we find it difficult to stand up and talk in public? Well then, why not provide chairs for our newsreaders? Does the news really have to be so depressing? Scotch News as it is currently formulated is 30% parliamentary hot air, 30% fish, and 40% murder. As a nation, we have a lot of weather, but we also have two weather forecasts: the BBC weather, in which the rain on Caledonia is shown on an electronic map which makes Scotland look like a suburb of Antarctica, and what the former newsreader and television critic Mr Kenneth Roy dubbed "The Wee Weather", in which Heather The Weather, or one of her impersonators, breathlessly describes rain in more words than the Inuit have for snow. Heather The Weather has improved - her early bulletins were like a race commentary delivered under water by Mr Jacques Cousteau - but I still like to have my rainfall confirmed by London.
I have more to say about this, but I must sleep, perchance to dream of Mary Marquis (Ms).
Posted by Kirk Elder at 3:44 PM 1 comment:

An Apology: Three Not Particularly Convincing Reasons Why I Became Invisible, And May Do So Again

Apologies for my absence from these "pages". There are many reasons for this but, in order of importance, the main ones are as follows. 1. I have been in a dwam for two months, caused by my sense of bafflement at the Scottish election result. 2. My computer, which is really an adding machine with a portable television Sellotaped to the side, has been suffering from foot-and-mouth disease,and has been held in isolation in the table tennis room at the Community Centre while "experts" assessed whether it was safe to release it back into the community (only doing so when I persuaded them that the explicit downloads which soiled my hard drive were, in fact, pop-ups which popped up without any encouragement, or understanding, from me.) 3. I have been in extensive rehearsals for an adaptation of my as-yet unpublished autobiography, And Not For The Better.
On all three of these matters, I can now report some progress. 1. My dwam has not weakened, but I now have a better understanding of the nation's politics. Roughly speaking, the electorate has no idea what it is doing, but in elections to the Scottish parliament, it is relaxed about the outcome, because it makes only a symbolic difference, and in the matter of symbols, the Scottish National Party is stronger than the Scottish Labour Party, which was, and is, unsure whether it is New or Old Labour, Scottish or British, or whether it aspires to represent the labouring classes, who are mostly Polish, and not registered to vote.
2. I have a new computer. I have no idea how it works, but I have written to my dentist asking for reassurance that it is not to blame for my teeth turning blue.
3. Due to an administrative error caused by a misuse of "Google" on my new computer, I accidentally booked my show into the 1966 Festival Fringe. This inadvertent distortion of the space-time continuum was accompanied by an outbreak of motion sickness, from which I have only just recovered.
However, having returned reluctantly to 2007, I will now be applying my forensic appreciation of the dramatic arts to this year's festival. Unless I stay in and watch Bargain Hunt, which is distinctly possible.
Posted by Kirk Elder at 9:21 AM 6 comments: