The Chat Show Host, The Prime Minister, His Father-in-Law, And The Strange Case Of The "Jazz Cigarette" 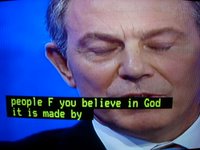 It was kind of Mr Michael Parkinson to invite the Prime Minister, Mr Blair, to be a guest on the first edition of the new series of his ITV chat show, and decent of Mr Blair to accept, thus lending an air of gravadlax to Mr Parkinson's programme, which - like its host - is a shadow of its former self.
The interview was given much publicity in advance, after editors (not least on Newsnight) decided to misinterpret Mr Blair's reference to his faith. In fact, he said almost nothing about God, and seemed embarrassed by the subject.
There was one peculiar moment, however, when Mr Blair embarked on an anecdote about his father-in-law (and Mr Parkinson's old drinking companion) Mr Tony Booth. The Prime Minister said that the first occasion on which he had enjoyed a decent chat with the former Till Death Us Do Part actor occurred just after Mr Blair had married his daughter, Cherie. Mr Booth began the conversation by saying: "Do you mind if I light a joint?"
"I said 'no', incidentally," Mr Blair told Mr Parkinson.
Was this, I wonder, what he really meant to say? If he said no, he had consented to a "joint" being lit in his presence. Whether Mr Parkinson pressed him on this point, we may never know, as it was interrupted by a commercial break.
Such timidity is disappointing from Mr Parkinson, who, incidentally, was awarded the CBE - by Mr Blair, via HM The Queen - in 2000.
Posted by Kirk Elder at 2:24 PM