After Bannockburn and Murrayfield, A New Form Of Nationalism, For We Are Not Blowhards, But A Country Of Mice 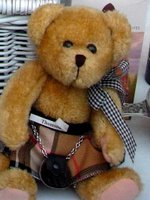 Now that a few days have passed since Scotland's victory over the English at Murrayfield, I wonder, is it safe to come out? I am no fan of rugby, having had my arm snapped in two places whilst playing the game at school; an event which was not deemed contrary to the rules, and which the PE teacher, Mr DeSade, ignored until my presence on the ground, moaning, became an impediment to the continuance of the game. Afterwards, the guidance teacher, Miss Germaine, fetched two dried prunes from inside the ironwork of her brassiere and administered them with a glass of stagnant pondwater, along with the instruction that the pain I was feeling was a punishment for my lack of athleticism. I was ordered to perform PE for the next year wearing only my pants and vest.
Needless to say, a dislike of rugby marks one out in the Borders, but I have always enjoyed the afternoons of the internationals. On those days,the streets of Peebles resemble the streets of Laredo, with tumbleweed, cotton balls and horse manure everywhere. Last Saturday, as Bannockburn was re-enacted, I was enjoying a lonely fruit scone.
But if the game is bad, what follows is worse. When Scotland beat England, we became, again, a nation of blowhards, puffed up on our own importance, as if the performance of 15 muscular men on a sporting field had something to do with the price of smoked haddock.
Fortunately, sporting pride is a short-lived delusion. But I do think that if Scotland is to prosper it needs to develop a more sustainable form of nationalism. It is not to be found in the apologetic boastfulness of the slogan "the best small country in the world". That only makes me consider moving to Monaco, or Denmark. Nor can the answer be found in the oratorical shortcomings of the Senior Retainer, Mr McConnell, who runs the country as if it were a coach hire company on the outskirts of Stirling.
Scottishness to me, is about reticence and repressed emotions. It is not a showy thing. It endures, but never draws attention to itself.
Oddly, as I try to picture it, I think of Robert Burns's ode to a mouse, and to Wee Jeemy, the friendly rodent in Oor Wullie. The anthem of this Scotland is Hermless, by Mr Michael Marra of Dundee, a song in which the nearest the author comes to a boast is the assertion that, as a people, we tend to return our library books on time.
Posted by Kirk Elder at 3:07 PM

Your post has released some sort of hidden memory.

I was also tortured by rugby players. This time, it was the inbreds of Galashiels after it was discovered that I had won the Borders Junior Orienteering Champion prize for running around like a headless chicken in Cardrona woods. This achievement, the pinnacle of my sporting career to this day, had the unintended side effect of highlighting how peculiar it was that my Asthma kicked in every time the PE teacher got the rugby ball out.

How fondly I recall the smug sense of satisfaction of knowing that I had lost my virginity to one of the 'Hockey girls' in the year above me (who, as I'm sure you're aware, are considered the property of the rugger buggers in the year above them), as the bannock waving townsfolk jeered, threw rotten vegetables, and stuck the ceremonial 'soor plum' somewhere too impolite to mention during the braw lads ride out.

Mr Wit, I sympathise with your plight. I trust you have since located your virginity. If not, try looking in the airing cupboard: most lost items turn up in there eventually.