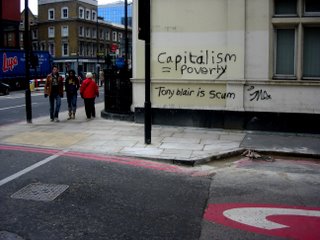 There are times, I confess, when I become downhearted about the level of political discourse in this country. But occasionally I have what my mother, Mrs Elder (or Ma'am), used to call "a moment", in which things do not seem quite as bad. (Mrs Elder was no optimist, and believed sincerely that good cheer should be avoided, in the certain knowledge that it was always followed by disappointment.)
However, as a judge in the Peebles Peewits International Photography prize, I was encouraged by the above photograph of a graffito on a wall near the City of London. I assume it was painted by a young person, and while the message is not sophisticated, it does display some engagement with the wider world. I particularly like the way that the vandal has taken the time to correct his spelling of the word "capitalism", ridding it of a rogue second "i". I suspect, also, that the first "e" in poverty began life as an "o".
I am not surprised to read in today's newspaper that everyone in England under the age of 42 has been served with an Asbo. Perhaps it would be more productive to insist that they watch Countdown. How else, in this world of incomprehensible text messages and synthetic phonics, will anyone learn to spell?
Posted by Kirk Elder at 5:19 PM

Far from sure that Mr Elder (or indeed his mother) will accept the concept, but perhaps the vandal is dyslexic. Nowadays, it is not enough that people can't spell, they have to have a label (or maybe a lable).

Looking at the height and shakiness of the graffiti (television is by and large the devil's work, but CSI is as good as an Open University degree in crime solving, though Grissom's peculiar bandy-legged gait speaks of rickets or a Douglas Bader style accident in his youth, and worries me) I conclude that the vandal is at most three feet tall, leading to the conclusion that the cuplrit is a small child. Oor Wullie would have surely graduated to such pranks, had he Dudley D Watkins lived in the spray paint era. Or perhaps it is a Crankie.

A fantastic photograph - but what appeals to me most is that Blair has been given a small b, now that is a person of some great insight!