Kilty By Suspicion: A Reader Writes 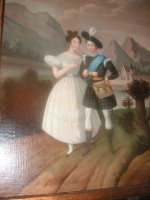 Further to the item (below) regarding the midi-skirt worn by the Senior Retainer, Mr McConnell, I received a note from a Mr McGregor, enclosing a picture of a painting in the Museum of Art Decoratif in Bordeaux. Mr McGregor writes: "It reminds me of someone; I was hoping with your extensive knowledge and expertise of men in gender- challenging kilts you might be able to suggest a name ( or two?) to jog my age and alcohol depleted brain."
It is, I agree, an intriguing picture, and a rather agreeable one. It reminds me of an edition of Thingummijig.
Mr McGregor also complains that the BBC, in its advertisements for a documentary on Oor Wullie, pronounced the word "whit" as "wheat", and "crivvens" as "cree-vins". I spent the last four days in the bunker, waiting for the storm to pass, and missed these calumnies, but I cannot say I am surprised by them. It has long been my contention that if our country's most famous actor, Sir Sean Connery, cannot manage a Scottish accent, there is little hope for the rest of us.
Posted by Kirk Elder at 10:46 AM

Crivvens, etc...pronounced as in Bernard...Kirk, dear chap, can I just point out that my only part in the Wullie documentary was to be interviewed for it? Mr Billy Boyd, erstwhile hobbit, was the mispronouncer in question. Angel Eye Productions were utterly and completely responsible for this and the Broons programme at Hogmanay, along with such captioning howlers as, err.. 'Eddie Reader'.
As for me - look out for 'The Life and Loves of Daphne Broon' a new musical coming soon...
Tom M

Apologies, Mr M. It is a sair fecht and no mistake. Never trust a hobbit!