Mr Alex Salmond's "New Scotland" Is Oddly Familiar, But The Forward March Of History Has Reached The Teacake Factories Of Uddingston 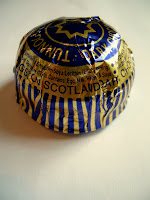 Try as I have, I cannot get the hang of Mr Alasdair Gray's nationalist motivational workout, in which one wakes each morning as if in the first days of a new nation. It is not the waking that is the problem. I awake each morning at around 12.28, just after falling asleep, as the teenage drunks make their way home, stoned on lighter fuel, pheromones and fortified wine, pausing only to fight with lamp-posts, dance like Nijinsky (the racehorse) across the bonnets of parked cars, before challenging each other to games of touch rugby using, as the ball, the grease-soaked wrappers which blow like post-apocalyptic tumbleweed down Northgate from Big Eb's chippie. With luck, Radio 4's Shipping Forecast will put me under again, though not without adding a meteorological backdrop to my dreams, which are stormy enough, thank you, on account of the cheese. And as the night progresses, my rest will be punctured by the barking of the urban foxes, and the pre-dawn squawking of the robins. Sometimes, in these insomniac moments, I am reminded of Mr Spike Milligan, who used to complain of the din of silence which surrounded his home in Rye, East Sussex: the snoring of the sheep, he used to say, was keeping him awake.
My morning rituals also get in the way of imagining that the country has been re-born. If Good Morning Scotland does not send me into a blue funk, I am statistically unlikely to survive unscathed the challenges of MacAulay and Co, which I now listen to in the bath whilst poking knives into the guts of the toaster in order to deaden the pain. Oddly, though the toaster is plugged in, I have yet to receive an electric shock, perhaps because of my sandshoes.
But, like Ronnie Corbett, challenged by a ladybird to a bout of Tae-Kwon-Do, I digress. My point is politics, and how oddly similar to yesterday tomorrow now seems. It is true, one gets a sense of the temporal nature of existence merely by looking at the countenance of Mr Jack McConnell - his hair thinning and grey, like his cheeks and his suits - but I am not yet convinced that the new Senior Retainer, the racing tipster Mr Salmond, has what the cowboys used to call "the proper mustard". If he is to achieve the statesmanship his rhetoric craves, he will have to learn how to appear on television without looking as if he is about to consume the camera.
But perhaps I am being unduly pessimistic. On visiting the Store for my ration of Billy Beef, I noticed that the sainted Mr Tunnock of Uddingston is now selling his teacakes with a plain chocolate coating. As a service to my readers, I have consumed a six-pack of these confections, and can advise that one is not enough, but two is too many.
Posted by Kirk Elder at 3:30 PM 2 comments:

How Labour Won The Battle, But Lost The War, By A Man Who Should Keep Taking The Tablets

I have never had much time for opinion pollsters, but this description of how Labour "won" the Scottish election from Mr Phillip Gould is so inventive that it deserves to be classified as Magical Realism.
Posted by Kirk Elder at 11:34 AM 1 comment:

Jings, Crivvens And Help Ma Boab - Scotland's Parliament Is A Guddle, A Bourach, A Midden

This morning - the third since the earthquake - I woke early, alerted by squalling robins serenading the mice in the coalhole. It is one of the perils of age that, once woken, nothing short of morphine can make sleep return and, as Mr Whippy's morphine van is not due until Thursday, I rose reluctantly. How did it feel, this new state? Oddly similar to the old one. I felt older, which is normal, not younger, as advertised. I thought, as I sometimes do, of Mr Alasdair Gray's rhetorical suggestion that we should work "as if ... in the early days of a better nation". It is, I confess, a splendid suggestion, but confusing too. Where is this better nation? The nationalists are fond of comparisons with the "tiger economy" of Ireland, but the success of that charming country has not been achieved by virtue of hard labour. Rather, it is an economy grown merry on the generous subsidy of the Common Market, horse-racing, and the side-effects of refrigerated cider. The Scottish Wildcat Economy, I fear, will be a harder creature to tame, if indeed it exists beyond the world of biological myth.
The news is confusing, but comforting. Mr Brian Taylor, the generously-appointed political editor of BBC Scotland, is everywhere still, twanging his braces at the splendid incompetence of the election, and using the word "guddle" as if it is going out of fashion, which it may be. Such has been his frustration that he has also been ejaculating in gaelic, using the word "bourach", which he defines as "an utter, hideous mess." Writing like a delusional Concorde pilot forced to crashland on Barra, he told the readers of his weblog, "this is a bourach, Mach Five."
Since my couthy ejaculations tend to come in the Doric after a glass of milk stout, I might have taken his word for this, but my able researchers uncovered an article published in The Scotsman almost exactly a year ago, entitled "A puckle of words in the braw Scots tongue", which contained the following definition: "A classic Gaelic word used by parents across Scotland is bùrach, used to describe a child's messy room. But according to Etymological Dictionary of the Gaelic Language by Alexander McBain (Gairm Publications, 1982) burach means 'turning up of the earth, digging; from the Scottish bourie, English burrow. The Scottish bourach, enclosure, cluster, knoll, heap, etc., is the English bower.'"
I am not sure whether this is the image the estimable Mr Taylor had in mind, but a child's messy room is exactly what our parliamentary system resembles today. My mother, Mrs Elder (or Ma'am) preferred the word "midden", but the meaning was, I think, the same. To our befuddled politicians, I offer Mrs Elder's solution, which came in the manner of a threat: tidy it up, or there will be no peas in your mince.
Posted by Kirk Elder at 3:37 PM 2 comments:

Mr Alex Salmond May Resemble The Cartoon Monster Shrek, But His Fairytale Election Will Not Make Scotland A Magical Kingdom 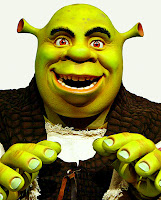 This morning, as I prepare to make the lonely trek to the polling station, I feel the hand of history on my moleskins. Scotland, it seems, is on the verge of electing a nationalist administration on a platform of "independence lite", which means that while Mr Alex Salmond (above, right) will have the keys to Bute House, and a mandate to stick a sprig of lucky white heather in the radiator of the ceremonial Hillman Imp, he will not hold a referendum until the nation has grown so bored of the question of self-government that it will do anything to make it stop. (Or, if you believe the ITN news - which I do not, having once met Mr Sandy Gall in a public bar - he has pledged to hold a referendum within 100 days).
It has been a queer election, and it may grow queerer still. If the polls are correct, the electorate has decided to vote for Mr Salmond because he has pledged not to implement the one policy which is his party's reason for existing - an act of selflessness which is at odds with his personality. In recent months, Mr Salmond seems to have modelled his appearance on the world's most famous Scotsman, the cartoon monster Shrek, but I am not yet convinced by his expressions of humility.
Mr Salmond is a contradiction wrapped in a contradiction. His popularity is based on the fact that he has proved himself on the big stage - the Westminster parliament which he refused to abandon until he had a realistic chance of heading an administration in the home country. The current Senior Retainer, Mr Jack McConnell - who even as I type is doing an inventory of the teaspoons of office - never graduated to the big school, and has done everything he can to make a virtue of small-mindedness. He has, however, succeeded in his pledge to "do less well".
Frankly, I am bored already by questions of nationality. I feel no great kinship with the Edinburgh bankers who play roulette with the economy, or the Glaswegians and the Gaels who decide that our national identity is best-expressed by television and radio schedules full of stairheid rammies and what used to be known as "the banter", but which might more accurately be viewed as a form of verbal diarrhea. As far as I can see, the Scotland of the nationalists does not exist, and even if did, it would do nothing to placate my disquiet with the crass materialism of the modern world.
In elections, I always ask one question designed to expose the misguided ambitions of our prospective leaders: will your party get the chewing gum off the streets? To this, I have added a supplementary question: why can I no longer leave my bicycle in the street without chaining it to a lamp post?
In the fairytale world of Shrek, I might expect some answers.
Posted by Kirk Elder at 10:00 AM No comments: