When I see garments labelled "Blue Harbour", I shiver, because there can be no more exact metaphor for death than docking one's tug in that melancholy port 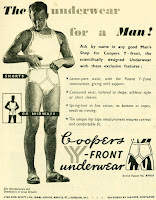 It is a terrible day, is it not? Increasingly, they are terrible, the days, and they fold together into terrible years. You may perhaps have your own reasons for thinking today is especially bad. For me, the tin lid was the Greggs' cheese pasty I just ingested. It tasted, I think, of defeat. My own. It was lukewarm - the better to avoid Value Added Tax. The pastry flaked over the tweed of my lapels like guilt. The cheese was not cheese in the accepted sense of the word. Certainly it was orange, luminously so, in the manner of a Scottish cheddar on the 12th of July. But it was liquid, apart from the bits that were powder. A sherbet dip-dab coated in nuclear effluvia would have been more nutritious.
Of course, I know enough about psychology to understand that I am transferring the anxiety of the age on to my indefensible lunch. And what else should I do in these torpid days? Anger is everywhere. Rage stuffs the ballot box. Our once great national newspaper has become an internet website on which readers are invited to contribute to top tens of great Scottish things which no longer exist.
All this being so, I feel that my general disposition - morose to inconsolable - is inappropriately light. As a child, I was forever being told by strangers to cheer up - an insult disguised as moral guidance which no longer resonates. But I have evolved. I once overheard the fabled Scottish mineworkers leader Mr Mick McGahey chiding his barber, Mr Larry, of Leith, when asked about his holiday plans. "Och, holidays?" said the retired Communist. "I'm done wi' that." For Mr McGahey's vacations, substitute my own good cheer. How does one respond politely to the invocation, "smile, it may never happen", when it already has?
Naturally, I am aware that such cheerlessness can be medicalised, if you'll pardon the ugliness of the word. Over the past year, I have been in and out of the dentist's waiting room often enough - seeking sanctuary from rebellious molars and anaesthetising my intellect by reading My Weekly - to understand that depression is the new black. As well as being full of constipated popes, the woods are full of bipolar bears, dark of fur and mood. Yet my discontent is constant and rational. Letting go of it would be a betrayal.
I sense, though, that I am becoming boring, which will never do. And, this being the season of goodwill, I have made my annual pilgrimage to Marks and Spencer, to purchase unmentionables in lieu of presents for myself.
I have written before about the terror of the gents' clothing department in Marks and Sparks. It has not improved. Even I, a conservative gentleman of mature years, find the clothes unfashionable. When I see garments labelled "Blue Harbour", I shiver, because there can be no more exact metaphor for death than docking one's tug in that melancholy port. It reeks of the death notices in The Scotsman's online dispatches column. ELDER, K: After a long battle with a tin of Bird's Custard,  sailed into the Blue Harbour. No flowers. Donations, please, to the Noise Abatement Society.
I mentioned unmentionables. That, really is where the problem lies. Finding the gents' clothing in Marks and Spencer requires fortitude and devotion. First, you have to battle through endless aisles devoted to ladies' nethergarments. The women who shop in Marks and Spencer have, at a conservative estimate, an average age of 167, and yet the aisles are decorated with the kind of imagery which used to give me a hot flush when I encountered it on the pages of Mrs Elder (or Ma'am)'s Grattan catalogue. The models are reminiscent of the nose cones of American bombers, and more dangerous. It would generous to say that they pout, but it is certainly a triumph of "Women's Lib" that the shop floor of a family store now resembles the back pages of an East German naturist magazine at the height of the Cold War.
And yet, somehow, we men battle through to the rear of the shop, ignoring the siren call of the Blue Harbour, past the dust clouds which gather around the machine washable business suits, through the permanently ironed shirts in new forms of nylon, and into the valley of pants. I will not describe the scene in detail. Suffice to say, it is a baffling display of capitalism's unerring instinct for novelty at the expense of decorum. Stretch cotton trunks, hipsters, stay-soft assorted niptucks, easy-to iron boxers, undercover tech, cool and fresh bloomers with "good coverage", micro-skin nad-nibblers, all of them modelled by body-builders carrying quarter pound bags of Midget Gems loosely concealed about their person.
Perhaps you recall the diplomatic incident in 2008, when the sage of University Challenge, Mr Jeremy Paxman, complained that his M&S unmentionables were strung with dodgy elastic, causing "widespread gusset anxiety". I fear that what we have now is the result of that angst. As a nation, we have been forced into the worst form of narcissism. Fixated on our own gussets, we are condemned to eternal discomfort.
Posted by Kirk Elder at 2:57 PM 2 comments: