The Beatles, The Arctic Monkeys, And What Happened When Ms Kirsty Wark Talked "Pop" With Sir 'Ming' Campbell 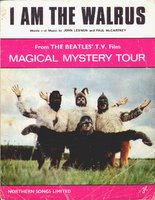 One of the hazards of listening to Radio 4's Today programme is that one is exposed to all manner of nonsense, and not all of it from the mouth of the Rt Hon Geoff Hoon MP. Thanks to this, I am aware - as no mature person should be - of the existence of a popular showband by the name of the Arctic Monkeys. I could not distinguish them from the Kaiser Chiefs, or even from Orange Bicycle, but I am told there are people who find their music admirable, in much the same way as some people enjoy adding honey to their porridge, in the belief that this transforms it into a "super-food" which will grant them eternal life.
I was disburbed, however, by the performance of the new Liberal Democrat leader, Sir "Ming" Campbell on Newsnight, when presented with a "pop quiz" by that well-known fan of the late Mr Roy Orbison, Ms Kirsty Wark. Sir "Ming" was able to quantify the minumum wage, but could not name the head of the UK prison service. He was then asked to say which town the Arctic Monkeys hailed from. He said he could not answer the question, but he did know that the group had sold more records than the Beatles.
I am not sure what the researchers at Liberal Democrat headquarters are feeding Sir "Ming", but I think he should take a spoonful less from now on. If the Beatles have not sold more records, then I am the Walrus.
Posted by Kirk Elder at 3:50 PM

And I am Lucy in the Sky With Diamonds!