The Singular Vision Of The Prime Minister, Mr Brown: Respect Is A Two Way Street, With Restricted Parking Between 8.30am-6.30pm 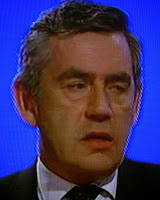 I am not sure whether the Prime Minister, Mr Brown, is familiar with the American rock'n'roll disc jockey, Mr Casem Kasem. I suspect not: he does not look like a man who has spent much time doing the hucklebuck. However, when watching Mr Brown's first Labour conference speech as Prime Minister, the catchphrase of Mr Kasem came to mind. It was, if memory serves: "Keep your feet on the ground and your eyes on the stars."
Mr Brown didn't say that exactly. But there was much talk about the rising aspirations of the British people. From a medical standpoint, these aspirations sound slightly worrying, a little like bluetongue, but Mr Brown is in favour of them. He talked about men moving up ladders, and women hitting glass ceilings. He is in favour of the former, but not the latter - which is excellent news for window cleaners.
He also came out strongly in favour of people. Mostly, these were British people. The British, he noted, had a tendency to "pull on their boots and pull out their boats", unlike foreign people, who carried guns and sold drugs. It hardly needed to be said that he was more impressed by the boots and the boats.
He also stressed the need for education, and demonstrated it himself, with two mixed metaphors. He pledged to "turn the silent rising tide of global warming" - possibly with the aid of boots, boats and King Canute's copy of the tides timetable - and, in an unexpected tribute to glow-worm farmers, spoke of the "golden thread of humanity which binds us together and lights the darkest corners of the world".
It was, I confess, a curious oration - strategic rather than passionate, and devoid of jokes or poetry. Mr Brown made too much use of the suggestion that his views have been formed by his meetings with people up and down the country. One of these people was in the hall: Mr John Smeaton, who wrestled a burning terrorist to the ground at Glasgow airport, received an ovation, and was allowed to sit next to the Prime Minister's wife. Another hero was a small boy called Max, who had uncombed hair - Mr Brown was in favour - and insited on reading the Prime Minister The Gingerbread Man.
Mr Brown didn't mention it, but The Gingerbread Man is the story of an aspirational biscuit, who runs from the oven, and is aided in his escape by several animals until he is eaten by a fox. The fox, presumably, was unaware of Mr Brown's other odd metaphor, that "respect is a two-way street".
Posted by Kirk Elder at 3:14 PM 1 comment:

Does The Chancellor, Mr Darling, Have A Darling In Every Port, Or Is He Just Unlucky Enough To Look Like A Banker?

It is often said that British people like to queue. This, I feel, is something of an exaggeration. The British like to feel as if they are part of the crowd, and filled with purpose. They will line-up to break crockery at the Harrods sale, or to place Esso flowers at the roadside of a fallen royal. They will even tolerate the lines at Post Offices, where they will be roped-in like calves awaiting slaughter, and serenaded by televisions offering cheap insurance. But they will do these things without excitement or pleasure.
There was, nevertheless, something terribly reassuring about the queues outside Northern Rock banks, as sensible people in waterproof jerkins stood in line for the right to withdraw their funds from a financial institution which had the misfortune to be caught behaving in the manner of a pier-end supercasino.
This morning, on BBC Radio 4's Today programme, an American commentator noted that it was fortunate that this crisis occurred in Britain; in another country, those lines of angry savers might have been less orderly. But the savers, by and large, weren't angry; they seemed to be in a very British state: happy to be disappointed.
Still, it has been a peculiar affair, and an interesting test for the new Chancellor, Mr Alistair Darling, a lawyer who resembles a banker, and who is temperamentally incapable of excitement.
For a long time, the most interesting thing about Mr Darling - a story confirmed by Labour activists from his Edinburgh constituency - was the fact that he had bluebirds tattooed on his hands, in the crook between the thumb and forefinger. These tattoos were small and faded, and easy to miss, but they did suggest that Mr Darling had an interesting past. I imagined him Shanghaied in Shanghai, or drinking coconut liqueurs in British Guyana. Perhaps his wardrobe was full of two dollar suits from Hong Kong. Was there a darling in every port for Mr Darling?
Perhaps. But, try as I might, I have been unable to confirm the existence of the tattoos, or of anything interesting in the early life of the Chancellor. I am told that he smiled once, around 1984, and there are dark rumours that on one occasion he ate a Kit-Kat between meals.
I can offer no proof of these events. But in this crisis, his dullness seems to have done the trick. The blame for the crisis has migrated to the Bank of England, and Mr Darling remains in Number 11, with his wife, his cat, and a pair of eyebrows he won in a poker game in Singapore.
Posted by Kirk Elder at 9:19 AM No comments: