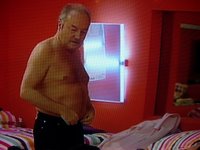 Frequently - and not just when frozen like a lame yeti in front of Celebrity Big Brother - I find myself mired in dread about the state of democracy. The expulsion of Mr Charles Kennedy was unpleasant, but it was, at least, an example of politics at its most creatively brutal, with Mr Kennedy playing the role of a sozzled Caesar in a room full of indecisive Brutuses.
It is what happened next that I find most distressing. Mr 'Ming' Campbell, whatever one may think of his role in the downfall of Mr Kennedy, has been judged and found wanting on the basis of one appearance at Prime Minister's Questions. Mr Campbell asked the Prime Minister about schools with a vacancy for a head teacher, and was repelled with a swift dab of Mr Blair's stiletto, who pointed out that Mr Campbell was in no position to complain about headless institutions.
Instantly, Mr Campbell finds himself compared to the former Conservative heir-apparent, which is unfair and a little unkind. Mr David Davis bored the Conservative Party rigid for months before it decided to pledge allegiance to the Lego-Man of British politics, Mr David Cameron.
Should careers be decided on such moments? Well, they should, if we are prepared to accept that logic, learning, principle, clarity of thinking, decency and consistency are now less important than an ability to survive a "sound-bite". In which case, Mr George Galloway - last seen discussing the merits of Mr Saddam Hussein with Ms Rula Lenska, whilst wearing a "peek-a-boo" dressing gown in a sauna - is ahead of his time.
Posted by Kirk Elder at 12:33 PM

It was surely such a gormless question that it raises questions about what sort of medications the poor chap is on. Mind you, I wonder about Toni's medications too.

The effect of the soundbite on politics has been disasterous.

The days when Gladstone could win an election by touring the country to give 3 hour speeches to packed halls on the Bulgarian massacres now look like another world.

A Scottish politco with a drink problem? Surely not. In a sensible Jeffersonian populist democracy, Kennedy's little hobby would be laughed out of court. Sadly we are living in times ridden by placemen who know nothing of the nature or behaviour of their fellow Scots