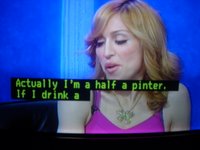 As a relative newcomer to the world of alcoholic decrepitude, I am something of a naif in the matter of drink-related snobbery. But there are some things I do know. I understand, for example, that the American man I overheard explaining malt whisky, and whose tutorial included a glowing tribute to a tipple called "Paddy", was looking at the world through the wrong end of an Esso tumbler.
I also understand that there is nothing fabulous about the prospect of the wine which is to be marketed under the brand-name of Ms Madonna Ciccone, a singer. Ms Ciccone has signed up with a company called Celebrity Cellars, of Napa Valley, California, to market a range of grog that will be, it says here, “as complex and sophisticated as the artist herself”.
That really is a frightening prospect. I am reminded of the moment, some years ago, on BBC2's Food and Drink, where the bubbly wine correspondent, Ms Jilly Goolden, took a sniff of Vino Collapso and declared confidently: "Ah! Essence of municipal swimming baths!"
Posted by Kirk Elder at 9:35 AM

Belief in Ms Ciccone's impeccable taste in fine wines is intellectually on par with a delusion that a sliver of stale bread and a mouthful of cheap vino are the flesh and blood of a god and pregnated with mana that can be absorbed by the cannibals who devour them.

Now, now boys..have you had the chance to imbibe fine wine with Ms. Ciccone? I do not know about her personal forays into the world of wine, but her father , Silvio "Tony" Ciccone has had a small winery along the 45th parallel for several years now & has been a force in the area for wine. In addition to that, Tony & his wife are very nice people. Suggest you check out the Ciccone Vineyards website, perhaps order yourselves some wine.