Professor Niall Ferguson Should Purchase A Mirror Before Asserting That Scotland Is Boring, Self-Absorbed And Educationally Sub-Normal 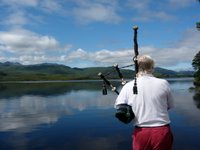 There is - with the possible exception of yesterday's bannocks - nothing as distasteful as an expatriate Scotsman denigrating his homeland from foreign shores. Mr Niall Ferguson, the intellectual Smallweed (and Laurence A. Tisch Professor of History at Harvard University), used the columns of the Sunday Telegraph to berate Scotland for, among other things, its "superiority complex". We must conclude that Mr Ferguson, despite his obvious vanity, does not possess a mirror.
But, still, his claims deserve examination.
First of all, he asserts that - on leaving Scotland for the spires of English academia in the early years of Thatcherism - he wittered on endlessly about the superiority of Scottish education, Scottish law, Scottish rugby, Scottish water, Scottish tweed, Scottish holidays. "I quoted Burns. I quoted Carlyle. I quoted the statistics that showed that Scottish regiments were the ones that did the real fighting in the First World War."
So, he was a bore.
But is it right to attribute this quality to the country he left behind? He then makes eight peculiar assertions, which are included here, in italics.
1. Scotland is a small, sparsely populated appendage of England. Those who called it 'North Britain' in the 18th century had it right.
Certainly, Scotland is attached to England, and some of it is sparsely populated. But if it is an appendage of England, shouldn't it be called "North England"? To assert that it is North Britain introduces the notion of Britishness, which is another thing entirely.
2. The weather is impossibly wet.
Perhaps Mr Ferguson does not understand the meaning of "impossibly". Either it is wet, or it isn't. The rain is possible. So is an umbrella.
3. Most of the land north of Loch Lomond is barren rock.
Perhaps Mr Ferguson was confused by the latest photographs of Mars from the NASA robot rovers, Spirit and Opportunity. The visual poetry of the Scottish highlands is not usually seen as a negative quality. Would a country full of factories and suburban bantustans of "executive housing" really be preferable?
4. Scotland lost its political independence 300 years ago and the creation of a Scottish Parliament, a glorified county council housed in a risible and over-priced folly of a building, has not restored it.
England also lost its political independence 300 years ago. The Houses of Parliament in London were over-priced, and considered by many to be an architectural folly. The Scottish Parliament may have limited powers, and it is housed in a building that looks like an explosion at a concrete factory (with added driftwood), but that does not negate the fact that the Scottish electorate voted for devolution. Indeed, the complaint that the Wee Parliament is a comparable to a county council is an argument for more devolved power, not less.
5. Educational standards in Scotland, once the highest in Europe, have - with a few exceptions - collapsed.
While it is to be regretted that today's pupils are not belted into submission by tawse-wielding sadists, there is no evidence for this assertion. Indeed, most debate on the collapse of educational standards is based on the problems of London.
6. When it comes to sport - and I do not count the one decent tennis player - Scotland is the Belarus of the West.
Should a mature nation measure its competence with reference to sporting success? I would contend not. Since the misplaced optimism of "Ally's Tartan Army", in 1978, Scots have developed an Olympian relationship to sporting achievement, celebrating participation and failure.
7. In fact, when it comes to just about everything, it is the Belarus of the West.
Mr Ferguson should, perhaps, visit Minsk, after he has completed a course of therapy for his obvious self-loathing.
8. That is why so many Scots emigrate. As I did.
See (7).
Posted by Kirk Elder at 10:44 AM

Is it a coincidence that Ferguson's rant appeared in the Telegraph? Or is it the revenge of that newspaper's proprietors for the ingratitude of the Scots for their ownership of the Scotsman?

awra best fur 2006 kirk elder , while I agree that Mr. Ferguson should keep his negative comments aboot scotland to himself , I would not give him the satisfaction of a reply , he is obviously a snob and a blinkered snob at that,what aboot all the americans and germans who flock here for holidays, and as far as the weather is concerned just look at the lake district and the moors of england, you could go on like tyhat and pick his comments to shreds with common sense , but why bother ? these people live in a different world

Well, if educational standards haven't collapsed, then I want to know where all the old people went to school, because judging by the standard of my secondary education it was unlikely to have been a council-run high school.