The Tweedy Weasels of the Liberal Party Are Knifing Mr Charles Kennedy Because They Fear Mr David Cameron, Not Because He Likes A Tipple 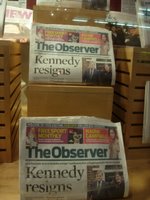 It is distressing, if not surprising, that Mr Charles Kennedy, the leader of the Liberal Democrats, should be brought low, not by drinking, but by a sudden outbreak of hypocrisy from his colleagues.
Facts in this matter are not easy to discern, but one or two seem reasonably self-evident. Mr Kennedy's colleagues knew about his drinking and conspired to keep it secret. Last November, when Mr Kennedy's self-control let him down, and he was - apparently - unfit to be seen in public, he was issued with an ultimatum: sort yourself out, or go. Mr Kennedy took the hint. He stopped drinking. He says he has not touched a drop for two months, and no one has contradicted this. So why have the Liberal Democrats suddenly decided to leak the the details of his medical condition and force him into highland exile? Surely it couldn't be because the Conservative Party has elected a young, telegenic leader who has been already been flirting with liberal policies? That would be cynical.
Posted by Kirk Elder at 8:44 PM

And are odds on to end up with the young & telegenic Ming the Merciless.

There was no reason to start running round in circles now - Kennedy should have been given time to prove he either could or could not clean up his act - either result would have allowed the Lib Dems to retain their name as nice guys. Cameron looks likely to find himself in an untenable position when he has thrown out every Tory policy & then has to make an actual decision on something (like supporting the next war).