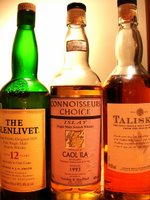 Regular readers of this journal may have noticed the small advertisements which appear at the top of the page. These exist to make running a "weblog" a commercial proposition, as well as a medical imperative. Every time a visitor clicks on the advert, the author of the web page qualifies for a payment.
True, it is not exactly a lucrative arrangement. In the last three months, I have earned an amount close to $2, though the contract with Google means that I will not be paid until I promise not to spend it all in one shop.
However, there is a certain satisfaction to be had in noting the changing content of the advertisements, which are generated by a computer, based on the content of the page. For some time, this page was carrying an advert for bereavement counselling. Momentarily, it was promoting ice sculptures. Two days ago, after publishing the item - below - about the political assassination of Mr Charles Kennedy, an advert for "Wheatsheaf Winter Breaks" appeared. "In Berwickshire, Scotland," it read. "Relax by crackling fire and sample single malt."
I have passed the information to Mr Kennedy, with Google's best wishes.
Posted by Kirk Elder at 11:03 AM

Have a good time

Inspired by these ads I have carved a huge ice bunnet as tribute to your good self. It measures 20feet across and resembles a glass UFO. My plans to likewise craft a Scotttish black pudding from ice were thwarted by the police, on grounds of public indecency

Perhaps you should try a red pudding.

I love your ads above all others. The one just now refers to Original Newspapers. Is there such a thing?