In An Election Of The Witless, Mr George Galloway Has Proved Less Unpopular Than A 'Page 3 Trollope'. But Is He Losing The Plot? 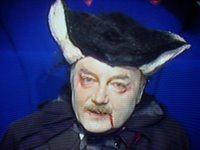 Since the beginning of the television freak-show Big Brother, politicians have looked on enviously at its ability to capture the attention of the younger generation, who are - it seems - happy to vote to humiliate or reward televisual idiocy, but unwilling to visit a polling station in order to select a member of parliament.
Personally, I do not see this as a crisis of democracy. The obvious solution - legislate to suit the needs of those who can be bothered to vote, and thus prompt the indolent into considering their electoral disadvantage - has, oddly, not been adopted by any of the main political parties. Instead, they attempt to pander to the foolish and the disengaged, thus punishing the intelligent, active electorate. Hence the streets are awash with under-dressed urchins, drinking "alcopops", smoking jazzy cigarettes, and generally behaving as if there is no greater imperative in life than the urgent need to share sexually-transmitted diseases to a soundtrack of tinny ringtones from their mobile telephones.
If this behaviour is a religion, Big Brother is its church. So, while I understand the desire of the MP for for Baghdad East, Mr George Galloway, to enter into the lion's den, I am not convinced that he has a full understanding of the dark forces with which he is dealing. If Mr Galloway seriously thought he could win over the affections of the apathetic, disaffected, self-centred, materialistic, chemically-altered, hormonal nitwits who worship at the altar of cheap celebrity, he should have been reminded of the Presybterian maxim: "never argue with an idiot".
Politicians cannot be expected to comprehend reality television. It takes a dramatist to understand that it has nothing to do with reality, but is, in fact, a form of improvised drama. In these circumstances, it is hardly surprising that its participants contrive to lose the plot.
Nevertheless, I worry for Mr Galloway. At some level, he seems to be taking too seriously the democratic aspects of the game. On Friday night, having surived an eviction vote, he was heard telling Ms Rula Lenska (his paramour in this plotless farrago) of his relief at proving less unpopular than a "page 3 trollope".
Without irony, Mr Galloway observed: "I said to Big Brother, 'I beat Roy Jenkins. I beat Oona King, I don't want to lose an election to Jodie Marsh."
Posted by Kirk Elder at 10:14 AM

I care little for the man's dangerous politics, his pasty, beady-eyed demeanour, or his odd habit of speaking about even the most trivial matters as if he were Solomon imparting a judgment. But I have a fondness for hucksters and charlatans and think if I am paying a chap I should at the very least be able to turn on the tv and see him licking Rula Lenska's hand while purring like a cat.