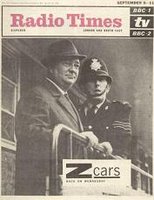 Despite the campaign to save it, the Radio 4 UK Theme remains a quite dreadful piece of music. It is a mess of folk tunes: the Jive Bunny of national anthems.
I was, however, interested to read that the composer of this travesty, Mr Fritz Spiegl, was also responsible for the theme to the great police drama Z-Cars, a stirring and marvellous tune.
Or so I thought.
Mr Spiegl, it transpires, was a thoroughly good egg. A Hungarian who fled the Nazis and arrived in England at the age of 13, he became a humorist, a linguistic pedant, and a populariser of classical music. His “Lizst Twist” was a popular event in Liverpool, and his invention, the Loophonium – a tuba attached to a decorated lavatory bowl with a lyre for a seat - has pride of place in the city’s Walker Art Gallery.
My memories of Z-Cars are all positive. It took police drama to a new level, and was so realistic that it was produced by the documentary department of the BBC. Once, under hypnosis at a tent mission in Dirleton, I was persuaded that I was Inspector Barlow, the corpulent detective played by Mr Stratford Johns, and – with the possible exception of a holiday at Butlins (Filey) in 1967 - I have never been happier.
So far, so good. My sympathies engaged, I visited the library and ordered a copy of the Z-Cars theme. It arrived this morning, and I was almost beside myself with excitement as I cranked up the Dansette. By the time the needle hit the vinyl, I was imagining myself in a heated debate with Sergeant Lynch in which voices would be raised, but authority respected. All would be amicably resolved and - the criminals incarcerated - I would be free to chat light-heartedly to Inspector Watt (Mr Frank Windsor), about our planned departure to form the Regional Crime Squad in Softly Softly, wherein we would solve vast criminal conspiracies, reminisce about Mr Brian Blessed, and go for long, thoughtful walks with Snowy the dog.
But, no. The Z-Cars theme, like the Radio Four UK Theme, is a folk tune (Johnny Todd) played stridently. In memory, it is as insistent as the siren on a racing Ford Zephyr. In reality, it is a sea shanty, which – from the grim perspective of a new millennium – brings to mind the image of a platoon of policemen performing a Riverdance in Clark’s Commandoes.
Posted by Kirk Elder at 12:56 PM

The tune in question is also a favourite for
marching Loyalists in the troubled province. Indeed, it served in this role
long before 'Fancy' Smith first took up his seat in the front half of the
Ford Anglia in which the crime-busting excitements were filmed.