The Economist's Talk Of "Affluenza" Is Typically Misguided, But It Doesn't Make the BBC's Mr Huw Edwards Any Less Frightening 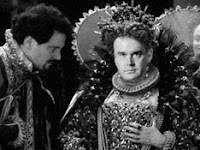 I am not in the habit of reading The Economist magazine, as I have always believed economists to be a species beneath pity. My mother, Mrs Elder (or Ma'am), on sending me to the Co-operative for morning rolls, would hand me the money with a stern warning that I was not to be diverted by beggars, gamblers or bank managers - these all being persons of the same kidney - and her lecture would end with a paraphrase of Mr William Blake's view that art is the tree of life and science is the tree of death. "Economics," Mrs Elder would say, "is the spider plant of eternal damnation."
However, on visiting my dentist this week, I found myself forced to wait for three hours and, in order to distract myself from the atmosphere of genial and expensive torture, sampled the magazines from the waiting room table. Some of these publications were not of recent vintage, but after exhausting the leather-bound editions of Titbits, I progressed with a weary heart to the bible of the suburban banker.
There, in The Economist, I encountered an article which claimed that the country was suffering from an ailment called Affluenza, the symptoms of which are low levels of personal happiness despite increased material wellbeing. I must say that I would welcome the chance to test my sense of emotional dyspepsia with a bout of increased wealth, but I find it hardly surprising that the population is in a dwam. Each night as I contemplate the milky balloon of skin on the surface of my Horlicks, I fully expect to be taken before the dawn by bird flu, terrorism, or a hundred other brands of "friendly fire". There is war everywhere, and a shortage of sparrows. Poles have taken over the Spar, and replaced the potted hough with a thousand types of sausage, most of which seem to be made of vulcanised rubber and shredded sand-shoe. The Union is on the verge of disintegration and Mr Fred MacAulay is still on Radio Scotland. The country is being overrun by mocking pylons and windmills which wave in distress at the impossibility of generating enough power to keep the country's growing collection of unnecessary electronic devices on "stand-by" while we wait for the big thaw, when the ice caps will melt, and the highlands will be overrun by a tsunami of disoriented polar bears looking for a single fish, with salt or sauce, whichever is most convenient.
I do not want to think about Affluenza. I have an allergic reaction to "buzz-words" and puns, because invariably they have been invented by men called Dave, who ride Chopper bicycles and spend their working days playing Mousetrap in a pathetic attempt to relive a childhood they never had, because they were too busy being spoiled by their divorcing parents whose idea of responsible childcare was to make the child wear an elasticated bow-tie, and to wait until the age of five before permitting him to drive a miniature motorcyle along the pavement to the tattoo parlour, before returning home with a satchel full of Woodbines and a packet of Space Dust for dessert.
Affluenza in nonsense. Unhappiness is as inevitable as it is logical, and should be celebrated as an act of reason. One need only turn on the news to become comfortably glum: just looking at Mr Huw Edwards (above, right) has me reaching for the Askit powders.
Posted by Kirk Elder at 6:29 PM

The link between Mind and Social / Environmental-Issues.


Emotion is what we experience during gaps in our thinking.

If there are no gaps there is no emotion.

Today people are thinking all the time and are mistaking thought (words/ language) for emotion.


When society switches-over from physical work (agriculture) to mental work (scientific/ industrial/ financial/ fast visuals/ fast words ) the speed of thinking keeps on accelerating and the gaps between thinking go on decreasing.

There comes a time when there are almost no gaps.

A society that speeds up mentally experiences every mental slowing-down as Depression / Anxiety.

A ( travelling )society that speeds up physically experiences every physical slowing-down as Depression / Anxiety.

A society that entertains itself daily experiences every non-entertaining moment as Depression / Anxiety.

A FAST (LARGE) SOCIETY WILL ALWAYS BE CRUEL TO ANIMALS/ TREES/ AIR/ WATER/ LAND AND TO ITSELF.


To read the complete article please follow either of these links :

Mr Elder, I have chanced upon your blog via Deolgolwulf's.

The idea that life is suffering is pure Buddhism; it is also wise, and I cannot think of any worse cruelty than encouraging the young to believe that they will be perennially happy.

Incidentally, your commentator, sushil_yadav, seems a bit disjointed to me. But what he says about industrial socieities is right. The rot started when mankind discovered farming.

Just read through the entire page and rocked with laughter. The comment at the bottom regarding folks from Dalkieth and shooting cows nearly killed me with a coughing fit brought on by laughing!

Have passed this on to friends as I hope to gain from their demise at reading this!

(Sushil, does he sniff glue?)

Despite my better judgment and politics, I have a subscription to The Economist and read it regularly. In my defense, as an American, my domestic media spectrum ranges from Fox News to NPR. Blech. Love your blog and writing, keep it up!