The Sandwich-Board Men Are Right. The End Is Nigh. A Solution To Global Warming. 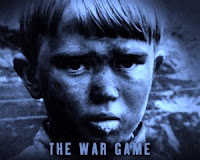 The weather, as a bald poet once noted, is variable, and so are we. But I wonder, at the risk of succumbing to False Memory Syndrome, whether the weather is worse than it used to be. It is winter, of course, so we should expect extremes of cold, and frosts, and perhaps the odd dusting of sleet. In January, too, a little wind may blow. The January sales are accompanied by the January gales. I would not mind a billow of smirr, or haar. All of these brands of inclemency can be navigated with wit and tweed clothing.
But the recent weather had been quite irregular. The rain, which rarely stops, is torrential; a cold monsoon. The sun never rises. The cloud is permament, the sky always grey. I have not seen conditions like these since 1966, when I attended an illicit screening of Mr Peter Watkins' apocalyptic film, The War Game, in which the aftermath of a nuclear explosion over Britain was dramatised (and found to resemble a particularly unpleasant episode of Z-Cars).
The news, of course, is full of climatic catastrophe. The Prime Minister, Mr Blair, has been criticised for catching an aeroplane to go on holiday, and his airbrushed doppelganger, Mr Cameron, has been busy fitting solar panels and a windmill to the roof of his Notting Hill home, in the belief that an electorate which has tired of "spin" will vote for a public relations man as long as he resembles Windy Miller from television's Camberwick Green. (The public, I fear, would much prefer Sergeant-Major Grout, though Mrs Dingle the post-mistress would be an interesting outside candidate).
Scarcely a day goes by without an outbreak of doomsaying. The sandwich-board men were right: the end is nigh.
In which case, why is nothing being done? I am aware that responsible behaviour is approximately as fashionable as my Polyveldt shoes, but I would have thought that the end of the world was a matter of some importance, even to a populace which has swapped sentience for celebrity, and civic responsibility with the National Lottery. Certainly, there are a great many distractions: terrorism has replaced the Cold War as a kind of Permament War, very similar to that mentioned by Mr George Orwell in his Jura novel, 1984: "A peace that was truly permanent would be the same as a permanent war."
But still, even in a time of perverted values, it is possible to do a simple calculation. The end of the world, by any sensible measure, is slightly more serious than the strikes and oil shortages of the 1970s. The emergency of the 1970s was met with the Three Day Week, and electricity black-outs. The country shopped by candle-light. Every second street-light was dark. The population was encouraged to brush its teeth in the dark.
How, then, have we met the challenge of the end of the world? By illuminating public buildings at night, and introducing "air-conditioning" to offices. Shops have heating which scalds the scalps of shoppers as they pass through their doors, and public houses have overhead heaters which are more efficient at warming the moon than they are at affording comfort to drinkers who, in a sensible world, would be curled up in front of a log fire with a cup of cocoa and a novel by Mr Nevil Shute.
What is to be done? Well, the modern solution to a problem is to give it a different name. The real problem with global warming is that it sounds quite pleasant. It should be rebranded to sound intolerable. I would call it Margaret.
Posted by Kirk Elder at 9:31 AM

Only yesterday I was remarking that my livingston daisies which die off each year around November, are still flowering, albeit in small flowers and in a very wet manner.

Judging by the number of roofing vans I have seen of late in the street, I wager that 'roofing' is the game to be in at present thanks to all the rain.

Always to look on the bright side though I am pleased to say that after a year without it running at its source, the Swanston Burn has burst forth just below Caerketton on the Pentlands and my daily walk is made to the sound of its bubbling. That is when I can hear it above the noise of the rain lashing against my sowester.

Sir, I am entirely confident that your pessimism is unwarranted. Ever since Nostrodamus first created Private Frazer to warn us of the impending apocolypse the doomsayers have been at it and apart from a few times when they struck lucky around the time of the black death and the world wars they've been proved over-enthusiastic in their predictions. Indeed, predicting the end of the world has become such an important industry that I don't think we could manage without it anymore although I think that fortunately it is now so well established that if the end of the world did occur, all that would survive would be the cockroaches and men with 'the end is nigh' sandwichboards, looking smug if slightly concerned that they should perhaps have knocked off a bit early and caught an earlier bus home if only the timing of their prediction could have been just that wee bit more accurate. The end of the world may be nigh, but nigh, as they say, never comes

I don't know but I think we should be told. You surely cannot be referring to the Blessed Margaret, Grand Scourge of the Scots and a Thatcher of that ilk?