The Post Office, One Of The Great Institutions Of State, Is Being Ruined By The Spivs And Weasels Of Commercial Greed 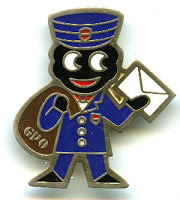 There was no post today, which was a blessed relief. There will be no post tomorrow, or for several days after that.
This, I understand, will be a hardship to some, but not to me. It merely means that my doormat will not be smothered in invitations to plunge myself into debt, recycle my clothes, or join the Conservative and Unionist Party: these being three versions of the same thing.
At some unnoticed point - my guess is that it was around the time of the Beatles' first LP - the nature of the mail changed. In 1936, Mr WH Auden was able to write in his poem Night Mail of how the whole of Scotland waited, "in the dark glens, beside the pale green sea lochs" for:
Letters of thanks, letters from banks,
Letters of joy from the girl and the boy,
Receipted bills and invitations
To inspect new stock or visit relations,
And applications for situations
And timid lovers' declarations
And gossip, gossip from all the nations,
News circumstantial, news financial,
Letters with holiday snaps to enlarge in,
Letters with faces scrawled in the margin,
Letters from uncles, cousins, and aunts,
Letters to Scotland from the South of France,
Letters of condolence to Highlands and Lowlands
Notes from overseas to Hebrides
Written on paper of every hue,
The pink, the violet, the white and the blue,
The chatty, the catty, the boring, adoring,
The cold and official and the heart's outpouring,
Clever, stupid, short and long,
The typed and the printed and the spelt all wrong."
Oddly, he made no mention of Nectar card statements or charity pleas, or pizza shop menus with free Coke and cheese, for those ordering 14 inchers on Tuesdays or paying by cheque. But then, nobody writes letters anymore. A hand-written note is a matter of alarm in a time of emails and mobile telephones, when everybody is available 24-7 or eight days a week, whichever is the longer, but it remains impossible to speak to a human to discuss why the Dormobile has received a parking ticket despite being dry-docked in a residents' zone, with permit displayed, as advised, in the left hand corner of the windscreen.
This does not make the decline of the Post Office any more palatable. One does not need to be a glue-tongued philatelist to understand that the postal service is one of the great symbolic institutions of the state, as important as a flag, and better yet than marching bands or crown jewels in a bulletproof vault. The post is, or should be, democratic: it delivers without fear or favour to one and all, to crofter or king. Why, then, is the Post Office in such a state? Even when the workers are not on strike, the junk mail no longer arrives before breakfast, and sometimes comes after tea, if the post is not lost, or misdelivered, or kept in a nest by a rogue postman collecting postal orders and CDs and urine samples out of some weird magpie urge because he wasn't loved enough when young, or suffered abuse, or dyslexia or peanut intolerance, or some other fictional modern ailment which made it acceptable for him to behave like a fiend and be excused and released back into the community on a technicality.
Remember Consignia? For a few months in 2001, at great expense, the Post Office "rebranded" itself, because the words "post" and "office" did not adequately explain its function in a competitive world. No matter that Consignia sounded like an upmarket launderette specialising in the dry cleaning of ermine robes and rabbit fur coats, with three shirts for a fiver on early-bird Tuesdays; the modern curse of rebranding had struck, meaning - as it always does - that a few spivs and designers were suddenly much richer while the rest of us were ill-served and bemused.
Shall I spell it out in green ink? The Post Office does not need competition. It needs postmen, or ladies, in smart uniforms, with hats, not jumpers, and pillar boxes painted pillar box red, and sub-post offices in villages staffed by matrons and spidery wee wifies who know everybody's business and everybody's name, and are nosy enough to notice when Wee Davy doesn't pop in for his pension and his bag of aniseed twists. That is what a Post Office is. It is not about business mail or verbal gymnastics or even logistics. Leave that to Mr Eddie Stobart, and his urgent fleet of lorries.
Posted by Kirk Elder at 9:11 AM

Yes. Very sweet!
The truth is more brutal and direct I'm afraid. We have an organisation long since rogue and ungovernable, a rasmshackle home for the remaining rump of "workers" who do not work, who by long established custom deliver the mail in one hour and by unchallanged custom take the rest of their paid shift off, or extort overtime for any further work. This is the vestigial remains of the huge overstaffed overpaid state industries finally given the coup-de-grace by Maggie in the 80s. This is socialism in action so beloved of the British voting classes.

Well said Kirk Elder. The Post office is a 'service' not a business.
Nor are postmen working only an hour a day. When I was forced out by knees corrupted by the job, I was regularly doing nine hours a day! If only the real world fitted with the dream of the 'Daily Mail' reader!

The place needed change, but this is nothing to do with improvement, today they just want to remove staff, cut costs and sell it off.
Service? No Post Offices outside of towns, no deliveries regularly to rural areas, no concern for staff orf customers. Only the 100 big companies are important, they pay, you and I don't. Privatisation will increase cost, lessen deliveries and help only the money men.

Hmm, anonymous at 3:39pm appears to live on another planet. When I was temping at a royal mail sorting office, I did note a couple of habitual skivers, but the rest of them worked fine. The management however seemed surprised that Christmas had arrived.

And as I predicted years ago, the price of postage keeps on rising, since a monopoly of post is the most efficient way of doing it, never mind the dreams of the market worshippers.
guthrie