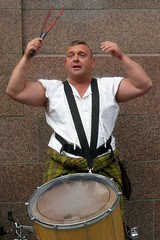 Scotland Gets The Culture It Deserves
Originally uploaded by Herschell Hershey.
I will admit that, as a resident of Peebles, I am rarely in a position to take the pulse of the national polity. Peebles exists in a state that is like 1955, with slightly more traffic and heavier rain, and young people who advertise their ignorance by playing terrible music on their mobile telephones. But, apart from this, everything is fine. Until approximately 1979, Edinburgh was like this. But somehow, over the last three decades, the city has become a true European capital; which means that its streets are thronging with hen and stag parties, the bars never close, and the holes in the ground which once made the city centre such a metaphor for Scottish dentistry have been filled with glass incisors, run by banks. I never thought I would be nostalgic for the political winter of Mr Alex "Red Eck" Wood, who ran the place like a socialist outpost of Ruritania, even decorating Princes Street with hideous banners which read, with a reassuring lack of poetry, "Improving Services, Creating Jobs". This was at a time when services could not be said to be improving, and jobs were scarce.
However, while on festival duties in the High Street, I chanced upon the council's current slogan: "Inspiring Capital". I understand there is a pun involved - which is bad enough - but is it really the case that the best that can be said for the great city by the Forth is that is excites money?
I have more to say, but first I must lie down. In the meantime, here is a drummer.
Posted by Kirk Elder at 2:10 PM

I came to Edinburgh as a student from the South West of England fifteen years ago, and decided to stay, not least of all because it seemed stuck, not so much in the past, but in a different mentality.

Although those days have gone, and we have our greed on show, there is only so far Edinburgh can change, unless they demolish it. The Grange and Morningside remain elegant and un-ostentatious, it remains a generally civilised place.