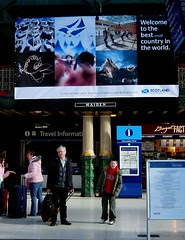 Welcome to Scotland (you'll have had your tea)
Originally uploaded by Herschell Hershey.
This morning, on Radio 4's Today programme, Mr James Naughtie announced something that many of us have suspected, but dared not enunciate. Scotland, according to a study, is officially The Worst Small Country In The World.
The reasons for this judgment were complex, but in large part, they seemed to be based on the fact that Glaswegians have a habit of dying young, though whether this is through a diet of Buckfast and tattie scones, drive-by "chibbings", or an over-familiarity with the dramatic arcs of the BBC Scotland drama River City, no one can say.
Mr Naughtie's guest on Today was Mr Pat Kane, a singer, whose contributions to the gaiety of the nation include a successful consultancy based on the ethics of play, and second place in the ITV television programme, Hit Me Baby One More Time, in which he was, as they say, "pipped", by the former communist, Mr Shakin' Stevens; a performer usually known by the less formal title, "Shaky".
I wish I could report the detail of Mr Kane's analysis of Scotland's failings, but to do so would would be unfair to all of us. In short, he seemed to be saying that the nation's "badness" was caused by the fact that it has yet to achieve full independence. His analogy seemed to be related to the common cause of depression: the sense that matters are outwith the control of the sufferer, which leads to low self-esteem, a failure to wash one's hair, and - eventually - arguments with oneself in a loud voice on the lower deck of the bus. (I have extrapolated the medicine somewhat).
I confess that I am not convinced by this line of reasoning. Indeed, I believe it to be entirely wrongheaded. The discovery that we are The Worst Small Country In The World is an inevitable reaction to the claim which preceded it, that we were, in some way, The Best. My mother, Mrs Elder (or Ma'am), used to warn against pride and boastfulness, by quoting Mr Thomas Carlyle, who noted: “The man of life upright has a guiltless heart, free from all dishonest deeds or thought of vanity." Each of these words was accompanied by a firm rap from her spurtle.
So, we are not the best, and we are not the worst. We just are, and that is depressing enough.
Posted by Kirk Elder at 1:00 PM