I Have Eaten The Future Of Newspapers, And It Tastes Sweet, Like A Mr Kipling Cake 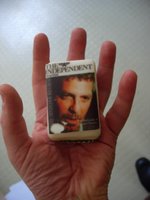 In recent years, newspapers have tried numerous tricks to tempt customers into buying them. They have changed shape, redesigned themselves, and added pages of something called "lifestyle", which is a feminine way of saying "insecurity". They once offered bingo, now it is sudoku. For a while, they gave away compact discs, but now DVDs seem to be the bribe of choice. In Scotland, the problem is acute, and the papers here have fallen back onto nationalism - most memorably in the form of the "free mince" once offered by the Sunday Scot.
As an enthusiastic reader of newspapers - albeit one who indulges his habit in the public library - I have witnessed all of this with a heart as weary as my fingertips are inky. Papers have become creatures of marketing rather than news, and their opinion columns have eschewed reason in favour of sensationalism.
But finally, amidst all of the experiments with formats, comes an innovation of which I approve. The Independent on Sunday, having already enjoyed considerable success in its new tabloid shape, is experimenting with a new style; printing its pages on small cakes. The edition I tried tasted quite similar to one of Mr Kipling's French Fancies, and was infinitely preferable to the competition. I once tried to eat the Sunday Times, and found it quite indigestible, especially the motoring section.
Posted by Kirk Elder at 12:43 PM

I regularly chew up newspapers, less for the nutritional value than to make a paste from which to fashion a new home when need arises, much like Barbapapa. I find The Guardian is ideal, with just the right mix of newsprint and self-importantly thick ink, while The Mail leaves a peculiar chemical taste in my mouth and an odd urge to lambast anyone not exactly like myself. I used to chew The Scotsman these days find the pages dissolve and run out the corners of my mouth like watery porridge. And one day, I found that the something I had stuck in my teeth was in fact a tiny piece of more resilient paper bearing the words "Andrew Neil". I am swallowing Rennies, still.

I can agree the sunday times tastes baaaaaaaaaad. Your lifestyle comment is too true. What is the world coming to?