Radio 4's UK Theme Makes Me Want To Cut Off My Ears With A Bic Disposable, And Is An Insult To Insomniacs And Milkmen Everywhere 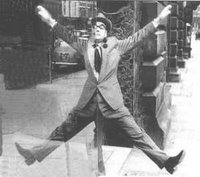 It is not often, in matters of public controversy, that I find myself on the side of the revolutionaries. True, I once supplied millionaire shortbread to the picket line outside the Peebles Coliseum when a lightning strike by the local branch of Equity attempted to halt a performance of Jesus Christ Superstar on aesthetic grounds, but, more often, when confronted with a barricade or an angry mob with pitchforks, I will retire to a shop doorway and do the splits in the style of Mr Harry Worth.
It is with some nervousness then, that I declare myself in favour of the plans of the Fat Controller of BBC Radio Four, Mr Mark Damazer, to abolish the station’s UK Theme. True, there are worse pieces of music, but most of them can be found on the 1974 long player, The Best of Adge Cutler, wherein the leader of The Wurzels girns his way through such catchpenny ditties as The Wurple-Diddle-I-Doo Song, The Champion Dung Spreader, Up The Clump, The Shepton Mallet Matador and When The Common Market Comes To Stanton Drew.
Predictably, the decision to abolish the UK Theme has attracted the support of numerous politicians, including the Chancellor, Mr Gordon Brown, an insomniac who is rumoured to nap while hanging from a branch in the manner of a vampire bat. But as a card-carrying insomniac, I must attest that there is no more depressing sound than the dreadful moment when the opening bars of Early One Morning give way to Rule Britannia. By the time Annie Laurie merges into What Shall We Do with the Drunken Sailor? I am usually domiciled in the smallest room, attempting to slice off my ears with a Bic razor.
Mr Damazer is wrong, however, in imagining that his listeners would be better served by a “pacy news bulletin”. There is too much news in the world already. Moreover, the thought of Radio 4 attempting to do something “pacy” is too terrifying to contemplate. For some reason, I am reminded of Mr Reginald Perrin, who had visions of a slovenly hippopotamus every time he heard mention of his mother-in-law.
Increasingly, I find myself at odds with Radio 4. There are isolated moments of loveliness – Desert Island Discs always endears – but too often the station resembles an endless coffee morning in Surbiton. Change is required, but Mr Damazer should avoid anything that might be considered dynamic. The UK Theme should be replaced by the elegaic Sailing By or, better still, the birdsong used as a test signal by radio engineers. Until this happens, my early morning station will be Radio Three. The music is terrible, but it is punctuated by heavenly outbursts of silence.
Posted by Kirk Elder at 4:03 PM

As the ruinous Thirdworldisation of Britain continues apace, perhaps it is time for the Bolshevik Broadcasting Corporation to introduce an appropriate medley including, but not limited to, a cacophonous Jamaican steel-band rendition of 'No Woman No Cry'(making no mention of the un-PC fact that the songwriter's father was a White,British army officer), a Ravi Shankar afternoon raag(GMT and Indian time differences considered), and, as a partial sop to those unsophisticated provincials who like British compositional efforts,Judith Weir's 'A Night at a Chinese Opera'. I would prefer that the BBC's selection not duplicate the Harrison Birtwhistle ring-tone of my mobile telephone.

oh shit; re-arrange the following into a well-known phrase or saying: PIEGORT.