As 'Today' Abandons Its Flirtation With 'Boogie-Woogie' And Returns To Its Tedious Best, Is There Finally An Answer To The West Lothian Question? 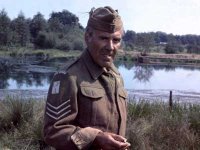 It was with some trepidation that I tuned into Radio 4's Today programme this morning. In recent days, this programme has resembled an aural edition of Disco 45 magazine, blasting out jitterbug music to an unsuspecting audience. As a result, I now find myself fully cognisant of the works of Mr Paul Weller and the Arctic Monkeys, though I am at a loss to understand how my life has been enhanced by such knowledge.
This morning, thank goodness, the programme was back to its reassuring, tedious best, with a joint interview between Sir Malcolm Rifkind and a gent from the shires, who may have been Mr Charles Moore, the former editor of the Daily Telegraph. Equally, it could have been Sergeant Wilson from Dad's Army. (If I knew what a "podcast" was, I would be able to check this fact, but I am not sure that my trusty Roberts R505 is capable of dealing with such things - it still refuses to accept that FM is not called VHF).
The two gentlemen were on hand to debate Mr Tam Dalyell's hoary chestnut, the West Lothian Question. The WLQ, as it is known amongst aficionados, is notable in that it is possible to debate the answer without ever mentioning what the question was. This obfuscation conspires to prolong the debate, and to mask the fact that the WLQ is a question as enigmatic and unanswerable as the riddle of the Sphinx. One might as well ask "why is a sparrow?" whilst wearing a tweed balaclava.
In my experience, there are two West Lothian Questions. One is "what are you looking at?" and it is usually delivered before one is assaulted at a bus stop. The other - often delivered moments earlier - is "sauce or vinegar?"
Posted by Kirk Elder at 11:38 AM

I do consider the "what are you lookin at?" question to be way superior to the supposed great philosophical ones regarding one hand clapping (I can do this an attest it makes a little clappy noise, as one might expect) and a tree falling in a forest.
The "looking at" question HAS no suitable answer, if one considers "suitable" to mean not being butted in the face. "Nothing" leads to the reply "are you sayin I'm nothin?" and violence. "You" is merely a shorter route to the same end. I would love to know if there is an answer.

"The WLQ, as it is known amongst aficionados, is notable in that it is possible to debate the answer without ever mentioning what the question was."

This is, of course, in marked contrast to the "Irish Question", which the Irish simply changed as soon as anyone got close to an answer.

I suspect however, that in Bathgate that might elicit the rejoinder "Are you trying to be clever?" and will also result in the inevitable violence.

You might get away with it in Linlithgow though.

I was once asked the question, "Why are you looking at me?" by a man whom I hadn't even noticed.

Thinking quickly, I replied, "Well, I know most of the people around here, but I didn't recognize you, and I wondered if I should introduce myself."

He shook my hand, told me his name, and went on to a different 'victim.'

My response was context-dependent, but adaptable. At a bus stop, one might say, "I thought that perhaps we had met before. Have we?"

Or something similar. The unexpected reply plus a bit of friendliness can often overcome the initial intent of the question.

In my experience, friendliness is often confused with insolence in the towns of Midlothian.