Have You Got A Light Mac? No, But I've Got A New Diving Suit: A Reluctant Outlaw's Response To The English Ban On Smoking 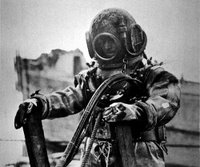 The recent vote by MPs to ban smoking in public places in England and Wales has, I am sorry to say, scuppered my plans to run a Puffer's Bothy at a secret location in the borders. An unventilated building had been identified, and a membership of 17 breathless souls had signed up with the intention of forming the Pestilent Air Society, a private members' club catering for those who find fresh air too taxing. The articles of assocation also included a designated drivers' rota, to take this bold constituency of Scottish wheezers to and from the club, wherein pipes would be packed, stogies chewed, and cinammon sticks lit, as a prelude to a ceremony in which we would chase a fox around a Wicker Man before settling down to a dinner of half-cooked beef-on-the-bone and eggy soldiers in a salmonella sauce.
As the society has now been outlawed, I have contacted my tailor, Mr Taper of Aitken and Cousteau (School Uniforms and Wetsuit Specialists of Hawick), and had him design me a smoking suit which will allow me to indulge my pipe in public without fear of arrest. The outfit is modelled on an early diving suit, incorporating the closed-circuit oxygen re-breather invented by Mr Henry Fleuss in 1876. As Mr Fleuss died from breathing pure oxygen when testing his device, the adapted garment includes a watertight tobacco pouch - a Walnut Plug plug - and a sealed helmet which traps the smoke inside the suit. It is effective to a depth of 20 metres, which is slightly more than 20 yards.
Posted by Kirk Elder at 4:16 PM