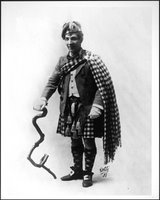 The launch of the National Theatre of Scotland should be a moment of pride and joy for the nation. Why, then, does the occasion offer only confusion to the traditional theatre-goer?
To start at the start: there are no bricks and mortar in the National Theatre of Scotland. There is no equivalent of London's South Bank - a concrete complex of cultural venues designed to bring cheer to the nation. Instead, the National Theatre of Scotland is - if I may adopt the jargon of contemporary theatre - a "space in the imagination". With this in mind, the director, Ms Vicky Featherstone, has commissioned 10 works which will occur in unusual venues around the country.
In Edinburgh, children aged from nine to eleven will re-enact First Minister's Question Time (a duplication of effort, surely, as our MSPs already govern with an air of pre-pubescence). In Musselburgh, children will be taken on a magical bus ride (the mind boggles). In Inverness, something unusual will occur in a Nissen hut (though the Herald's spelling of the hut as "Nissan" suggests a surprise involving a Japanese hatchback). In Caithness, an old lady suffering from dementia has been marooned in a glass factory filled with 150 tons of sand.
I do not wish to mock the National Theatre any more than it mocks itself. But as a judge of amateur theatre contests, I have the sense that these works have been designed to satisfy a craving for novelty which is based on a fear that theatre is no longer - oh, my weary heart - "relevant".
Well, one way of making sure that something becomes irrelevant is to let it wither. I fear that our drama lovers are being denied the experience of real theatre, most obviously in the absence of a grand building in which the work can be framed. The theatre is the temple of the dramatic arts. It should be welcoming and intimidating, plush and forbidding. As usual, I am in agreement with Dr Johnson, who said of theatre: "At all other assemblies, he that comes to receive delight will be expected to give it; but in the theatre nothing is necessary to the amusement of two hours, but to sit down and be willing to be pleased."
To that, I would add a caveat. He that is willing to be pleased should be able to buy Matchmakers, or a family box of Maltesers, and doze gently until the cad - played by Mr Tom Fleming OBE - is unmasked.
Posted by Kirk Elder at 10:01 AM

Wonderfully written and OH SO TRUE!

Wonderfully written and oh, so, true! Thanks for the smile it brought to a miserable old git's face...