Mr Joaquin Phoenix Is No "Man In Black", But Watching His Impersonation Of Mr Johnny Cash Is Like Visiting A Fond Memory Of Brigadoon 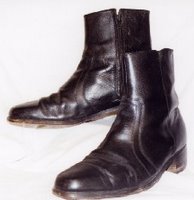 The latest of my cinematic excursions - as part of the long trudge towards the Bafta awards - took me to see Walk the Line, a film in which the long career of Mr Johnny Cash is condensed into a sanitised account of his love affair with Miss June Carter, of the Carter Family.
Now, I have nothing against the late Mr Cash. True, his singing voice lacked the velvety richness of "Gentleman" Jim Reeves, and he had none of the unapologetic peculiarity of Mr Charlie Poole (whose repertoire included such timeless favourites as Goodbye Booze and The Man That Wrote Home Sweet Home Never Was A Married Man). But, if what you were seeking from a singer was a man who walked like one of Mr Sergio Leone's spaghetti gunslingers, and who sang with the unworried abandon of a travelling salesman in the shower stall of a stucco-fronted motel, the brown-eyed and handsome Mr Cash was, indeed, your man.
The film is an act of impersonation and amplification. Mr Joaquin Phoenix does a decent job with his turn as Mr Cash, while Miss Reese Witherspoon is too sweet and normal to be truly convincing as Miss Carter, a woman whose charm was best described as "folksy".
For the purposes of the drama, Mr Cash's life is simplified. There is no real acknowledgment that the "Man in Black" was also in awe of "The Man in White": the disciple Paul was the subject of Mr Cash's novel, and he experienced his own Damascene conversion when God spoke to him as he lay in a cave, waiting to die.
These elements of Mr Cash's life are absent from the picture, which concentrates instead on his empathy with the inmates of Folsom Prison, thus casting him in a fashionably rebellious light.
The reality of the man was more complex. I witnessed him in concert on several occasions, and the most moving moments were not always musical. For instance, I recall seeing him at the Scottish Exhibition and Conference Centre in Glasgow, when he introduced a mawkish tune, written in the style of a Scots ballad. The song was called A Croft in Clachan, and it had more to do with Brigadoon than Scotland, past or present.
Nevertheless, Mr Cash, who had traced his ancestry to a distant sea captain in Strathmiglo, Fife, was overwhelmed by the power of the moment. With the salt of fresh tears staining his face, he apologised for the song, saying that he knew it would sound false to Scottish ears, but that his intentions were sincere, and that he felt intimidated and honoured to be singing it on Caledonian soil. Well, the song was just as sentimental and bogus as it had sounded on record, but there was no doubting the emotional turbulence of the moment. Just as Mr Cash had cried, so did his audience.
Walk the Line performs the same trick. It celebrates a version of Mr Cash's life that is partial and distorted. It is a tribute to a sentiment. Nevertheless, it has the power to evoke the memory of a romantic myth.
Posted by Kirk Elder at 5:04 PM

Hello Kirk Elder,
I'm sure you won't take this the wrong way from a fellow blogger, but as a perfectionist (which I know you are) you should not have spelled Strathmiglo with a final w!
This lovely little village in Fife will no doubt soon become a hive of activity as the media vultures descend on the birthplace of the man who delivered a nasty shock to New Labour by overturning a substantial winning majority and securing the Dunfermline and West Fife constituency for the Liberal Democrats. Yes, Willie Rennie, 38, is a Fifer who now lives in Kelty with his wife and two sons. But he is originally from Strathmiglo where his grandfather was the minister and father the grocer. I assume that as he now has the salary of a member of parliament to fall back on that he can now afford to return to the village of his birth! Mention of ministers and grocers a forebears brings to mind the late John Smith and former prime minister Margaret Thatcher. Given these portents, is Mr Rennie destined for much greater things?
pip pip

Dear Mr Hack,
Thank you for your kind note. The error has been rectified. It was caused by the nervousness I feel whenever I think of Fife, thanks to an unpleasant incident in the swimming baths of Glenrothes in 1974.
Sincerely,
KE

It's often forgotten, but Johnny Cash once presented his TV show from the ramparts of Edinburgh Castle. June was there too, along with lots of pipers.
Johnny's jacket from this event was included in his display in the Country Music Hall of Fame.