Caveat Emptor: The Soul of Mr George Galloway (But Not His Saucy Red Leotard) For Sale. Offers Over £2050. Iraqi Oil Vouchers Not Accepted. Honest. 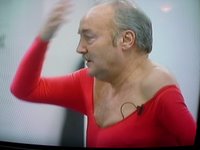 You might think that Mr George Galloway, having emerged from the Big Brother house to a reception of ridicule and mockery, might have applied the first law of holes: when you're in one, stop digging. Instead, the Respect MP has apparently licensed a friend or colleague to sell - on the internet auction site, eBay - souvenirs from his time in the overlit bungalow of cheap celebrity. At the time of writing, Mr Galloway's Big Brother suitcase and overnight bag have attracted a bid of £102 (roughly, one suspects, what one might pay for them in the luggage department of John Lewis). More surprisingly, Mr Galloway's "Cuba hoodie", his VIP pass, and "the famous eye mask he wore in bed" have attracted a bid of £1040. A Sir Jimmy Savile "job lot" including Mr Galloway's "Jim Fixed It For Me" medallion are currently standing at £102, though there are six days remaining on the auction.
Thankfully, there is no sign (yet) of Mr Galloway's snug red leotard. Sadly, the administrators of the site have seen fit to withdraw the entry offering the soul of Mr Galloway. After less than a day on offer, this item had attracted 57 bids, up to a price of £2050.
Posted by Kirk Elder at 6:17 PM