Paradise Lost In The Observer: Take A Train To Haddington And A Taxi To Never-Never Land 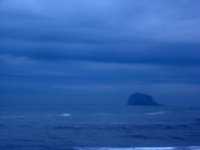 Journalism is an abject trade, and travel journalism is its most corrupt chapter. It existence has nothing to do with the interests of the reader, and everything to do with advertising. You might expect journalists to complain about this, as they are never slow to accuse others of hypocrisy or corruption. But they do not. Complaining would mean that they were no longer able to embark on free holidays, luxury hotel and spa breaks, and discounted cruises. It might also go some way towards stemming the global warming caused by the dismal business of world tourism, in which poor people traverse the globe in the Sardine Class compartment of unsafe aeroplanes searching for paradise islands which only existed in the limited imaginations of hacks whose definition of a good time is a free dinner and a key to the mini bar.
But this is not the worst form of travel journalism. The lowest form is the "reader's recommendation" in which a newspaper fills its columns with the views of the public, on the understanding that these opinions are somehow unbiased, despite the obvious danger that those same readers may be related to the hoteliers, inn-keepers and restaurauteurs whose establishments are being praised. Nevertheless, this form is increasingly popular, as it allows editors to fill their pages without paying for journalism.
Yesterday, The Observer excelled itself with a page of readers' recommendations of "cool campsites". I particularly enjoyed the reveries of a Ms Corra Boushel, of Edinburgh, on a place called: "The Beach, East Lothian."
"The spot is hard to find," she wrote, "but well worth the trouble. Take a train from Edinburgh to Haddington, then a taxi to the beach car park, about two and a half miles before North Berwick. From there walk a little over the dunes and pick your pitch, sheltered by dry stone walls and pine trees. From the top of the dunes you can look over to Fife, with industrial Kirkcaldy glinting back across the River Forth. To the west is Bass Rock, covered in a creamy white duvet of sea birds. There is firewood with pine scented logs, an exfoliating wash in the icy firth and the occasional dog walker to offer a smile. There's no fresh water, no mobile phone reception and no one to hear you singing to the trees and stars at night. Heaven."
Frankly, I am very worried about Ms Boushel, and the geographical improbability of her Nirvana.
There is, of course, no railway station in Haddington, which would make her journey problematic to begin with. Haddington is not on the coast at all, but several miles inland. Rather than taking a taxi from a non-existent station to North Berwick, would it not be simpler to try to hail one from the station at North Berwick itself? But what to tell the taxi driver? If the beach is two and a half miles out of North Berwick, it could be Yellowcraig, if it is to the west, or Seacliff, if it is to the east. The existence of dunes, and the view across the Forth estuary to Fife, suggests it is the former. But if so, how does the Bass Rock (pictured) appear in the west, when it is actually in the east?
I am baffled and intrigued. I would attempt the journey, but I fear I might have to hire the Tardis.
Posted by Kirk Elder at 12:04 PM

Dear Mr Kirk Elder: I understand your bewilderment at the dire travel advice given in the newspapers. For your enlightenment, though, you might like to know that this method of getting everyone to write in with their prejudices and ignorances is called a "wiki". That's the same as in wikipedia - an encyclopedia of everyone's prejudices and ignorances... YOu'll be shuddering already.

Thank you, Ms Bondwoman. This is worrying news, but as the word "wiki" does not appear in my dictionary, I have decided to ignore it in the hope that it will go away. The closest word I can find is "wickthing" - Lancashire dialect for a creeping animal.

May I be earnest? I have been struck, for several years now, by how many writers confuse east and west but never, as far as I can see, north and south. There must be a PhD in it. P.S. aren't the dunes even finer at Gullane?