Mr Michael Powell, The Scotsman Editor, And A Beautiful Premonition Of Doom 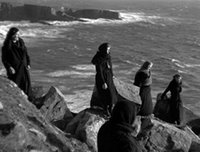 I spent a grand afternoon at the Athenian Hall watching Mr Michael Powell's splendid 1937 film, The Edge of the World. The film is a beautiful work of cinematography, made more colourful by being shot in black-and-white, and concerns the slow death of the fictional Hebridean island of Hirta (based on the evacuation of St Kilda, but filmed on Foula). There is much to commend about it, including several outbreaks of poetic pipe-smoking, but my favourite moment occurs when the mist clears and one of the characters exclaims: "the hills of Scotland!" It is always bad luck when the hills of Scotland come into view, and so it proves for Mr John Laurie, doomed, long before Dad's Army.
The screening was organised by the cinema wing of the Peebles Showboaters, and included a lecture by our resident cineaste, Mr Arthur Gout-Hardy, whose 1954 film of life in Drem, One Horse, One Post Office, was said by the critic of the Peebles Times-Picayune to have influenced the free-flowing style adopted much later by Mr Martin Scorsese in the agricultural drama Mean Streets.
Mr Gout-Hardy gave a talk, followed by some of Mr Powell's "home-movies", shot long after The End of the World, on one of the director's frequent walks in the Scottish highlands.
These short films were every bit as evocative as the films of Mr Claude Friese-Greene (recently presented on the BBC by Mr Dan Cruickshank). The hills of Scotland looked far from ominous. More remarkable still, Mr Powell's kilted companion on those walks was Sir Alastair Dunnett, the editor of the Scotsman from 1952-72, who can be seen enjoying the dramatic views. Mr Powell's love of Scotland is obvious, as is that of his friend. So why did I feel so melancholy when presented with this image?
Posted by Kirk Elder at 7:29 PM