Ms Ruth Wishart, The Scottish Question, And The Role Of Ethnic Vegetables In This Summer's FIFA World Cup 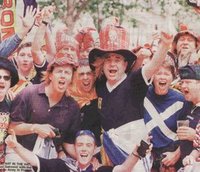 In Peebles, thankfully, one is insulated from the worst aspects of football fanaticism. The local team, Peebles Rovers, held Hibernian to a goalless draw in 1923, but their efforts in recent years have been less spectacular.
None of which explains why the FIFA World Cup should be allowed to blight the summer, but there is every sign that it will.
Already in The Herald, the indomitable Ms Ruth Wishart has exercised the arguments in favour of the Scots being able, and indeed encouraged, to disaparage the efforts of the English, on the grounds that Scotland is a daft wee country comprised of prejudice and self-loathing in equal quantities, which - like some antithetical Brigadoon - only exists when it is indulging in choreographed displays of national masochism. (I may have paraphrased her argument a little).
And today, in The Independent, the Commons diarist and wag, Mr Simon Carr, used his column to disparage the parliamentary efforts of Mr Des Browne MP, Mr Adam Ingram MP, and - with less force - Mr Alistair Darling MP.
Mr Carr's chauvinism was not conducted undercover of the fog of football analysis, so it seemed more offensive. The parliamentary answers of Messrs Browne and Ingram made one want to throw "ethnic vegetables" at them, he quipped, adding; "do they have vegetables in Scotland?" Mr Browne's answers to various questions were, said Mr Carr, so piffling "you'd be better off quizzing your haggis". In conclusion, the diarist offered that Mr Browne's continued high office was part of the Prime Minister's cunning plan "to get us sick of being governed by Scotsmen."
It would not do to take Mr Carr any more seriously than he takes himself, but there is something offensive about his belief that racism against the Scots is a valid form of humour. I would write to his editor and complain, but I am reminded by Ms Wishart that the racing tipster and leader of the Scottish National Party, Mr Alex Salmond MP, (pictured, in silly hat) has pledged his support in the World Cup to Trinidad and Tobago, on the grounds that they are not England. In this case, Mr Salmond is the ethnic vegetable.
Posted by Kirk Elder at 4:26 PM

I shall also be supporting Trindad and Tobago in order to increase the prospects of having backed the winning team when it's all over than if I had taken the more traditional route of supporting my own country's side. The practical difficulties are only now becoming apparent however, such as obtaining Trindidad and Tobago flags on plastic fittings that fit in a wound up car window and making it to the victory parade in Trinidad's fair capital city given my fear of flying and the clash with my BNP meeting.