Mr David Cameron Is A Shakespearian Imp With A Chaffeur For His Shoes. He Should Spare Us His Emissions By Driving An Electric Bubble Car 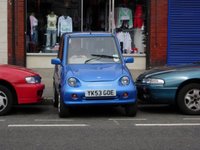 Since Mr David Cameron rose without trace to become the peach-skinned leader of the Conservative Party, I have seen little to change my initial impression that he is a flibbertigibbet. I mean this in the Shakespearian sense of the word - as defined on the excellent World Wide Words site - meaning a demon or an imp. In King Lear, Edgar describes one such creature: “He gives the web and the pin, squints the eye, and makes the harelip; mildews the white wheat, and hurts the poor creature of earth.” If there has ever been a more succinct definition of public relations, I have yet to read it.
This morning on Radio Four's Today programme, the organic farmer Mr John Humphrys challenged Mr Cameron - not long returned from a journey to uncover his inner polar bear - on his “green” credentials. Mr Cameron, it seems, is in the habit of cycling to Westminster, followed by a car. The latter vehicle is required to carry Mr Cameron's papers, and his shoes.
Asked to justify this, the Conservative leader whimpered defensively. As it was radio, I could not say for certain that he squinted his eye or made the harelip, but it all sounded quite unpleasant.
Last week, Mr Cameron made another ecological gaffe, posing beside an electrical car - the Reva G-Wiz (pictured) - though he drives something far bigger and far uglier.
I have investigated the G-Wiz, and understand it has enough storage under the bonnet for a pair of Church shoes, and ample space in the back for several boxes of paperwork. It produces no noxious emissions, and costs around 1p per mile to run. But Mr Cameron knows that. He just chooses to ignore it.
Meanwhile, the white wheat is mildewed.
Posted by Kirk Elder at 6:22 PM

didnt he come up from the ranks of the Carlton television clique?
he seems to be surrounded by advisors and colleagues from said ilk

But is this little car able emulate the late Armenian oil tycoon, Mr Nubar Gulbenkian's customised London taxicab and "turn on a sixpence" - whatever that is.