They Tuck You Up, Your Mum And Dad: Swearing On The BBC - Part 57 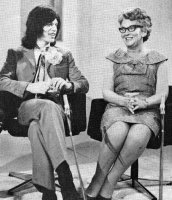 Yesterday, on Radio 4's The World at One, the BBC broadcast the "f-word". They repeated the trick on the television news at 10pm. At 7pm, Channel 4 News broadcast the same clip, but chose to bleep the word, which was, nevertheless, identifiable.
The context of this lunge into industrial language was the press conference given by Mr Mohammed Abdul Kahar and his brother Mr Abul Koyair, who were arrested in Forest Gate, after police suspected their home of being a terrorist bomb factory. Mr Kahar, who was shot in the raid, was quoting the abuse he claims to have suffered from a policeman.
The plight of Mr Kahar is unenviable, but did the BBC need to broadcast his words without modification? This occurred on the same day that Mr Chris Moyles, a "disc jockey", was condemned for describing his female listeners as "dirty whores" on the Radio 1 breakfast show, after an item in which he asked them to admit to urinating in the shower. (Radio 1 has now introduced a system of fines for its presenters, and not before time. If Mr Tony Blackburn had been fined for Arnold the dog, we might not be in this mess.)
On Desert Island Discs last week, Ms Sue Lawley urged Mr Armando Iannucci to repeat the catchprase uttered by Mr Peter Capaldi in his political comedy, The Thick of It. Mr Iannucci duly did, and the airwaves were filled with bleeps, causing Mr Iannucci to joke that the listeners would imagine they had just heard the pips. (For the record, the catchphrase is: "Come the **** in, or shut the **** up.") I recall an earlier incident on Desert Island Discs, where Ms Lawley frightened the actor, Mr Richard Griffiths, by repeatedly urging him to repeat on air the line of dialogue which is often shouted at him by fans of the film Withnail and I. Fortunately, Mr Griffiths was composed enough to avoid regurgitating the famous line, "Uncle Monty, you terrible ****."
We have come a long way since Mr Kenneth Tynan first uttered the f-word on British television in 1965, and was rebuked by Mrs Mary Whitehouse (pictured, with Mr Mick Jagger). In a letter to HM, The Queen, Mrs Whitehouse suggested that Mr Tynan "ought to have his bottom spanked."
These days, Mrs Whitehouse's remark would prompt a spin-off series on Channel 4.
Posted by Kirk Elder at 11:01 AM

Mrs Whitehouse suggested that Mr Tynan "ought to have his bottom spanked."

Ah, how we have indeed come to a pretty pass, KE:

These days, of course, one is commended for profligate use of the "f" word, but castigated for administering a spanking.

Tynan was, of course an aficionado of the Divine Marquis(who was really a self-promoted Count) and Ken's contribution to 'a spanking' would certainly not have been a passive one. Like all sadists, Tynan entertained a righteous appreciation of the symbiotic relationship between spanking and sodomy, the latter activity indicating his favoured method of amatory ingress.

I take it that in the accompanying photo it's Mrs whitehouse on the left, and Mr Jagger was appearing drag.......