The Glazed Doughnut Of English Nationalism - A World Cup Symbol Of Cross-border Co-operation? 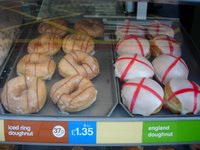 As the FIFA World Cup approaches with all the charm of a locust storm, there will, I am sure, remain a hardcore of fanatics who imagine that the tournament has something to do with sport and the Corinthian spirit, when it is actually a commercial enterprise in which the shallow hopes of the world's downtrodden are inflated (and then deflated) in a choreographed conspiracy of commerce.
Not that all commerce is bad. On a recent reconnaissance mission to England, I came across those iced delights in the window of Greggs the baker's, a shop I had mistakenly imagined to be Scottish, so perfectly do its cheese and onion pasties fit into the national cuisine. (The "cheese" - a kind of thermonuclear paste of uncertain constitution - has a particularly Caledonian bouquet.)
I suspect the First First Minister, the late Mr Donald Dewar (nickname "Gannet"), would have appreciated these cakes, despite their national allegiance. Perhaps the Chancellor already does. My contacts at the Treasury canteen insist that, while Mr Brown often selects a lunch plate with salad, he can be relied upon to return to the serving hatch for chips and a bun.
Memo to the Foreign Office: if national identity was expressed in cakes, there would be fewer wars (or fatter soldiers).
Posted by Kirk Elder at 1:46 PM

that's why they call him gorgin' gordon, the snacks and spend chancellor.

Bill Tennant's infamous remark on Scottish televison.
"...and I hope all your doughnuts turn out like Fanny's". sprung to mind when I read this article.

In the interests of decorum, I think it relevant to point out that the "Fanny" to which Mr Tennant referred was the indomitable television cook, Ms Fanny Cradock.