HM, The Queen And My Sex Abuse Shame 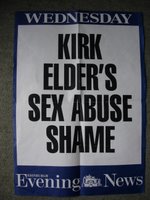 I was intrigued to read in The Guardian that the London Evening Standard recently attempted to lure readers with a bill which read; "Queen takes cab to the theatre". It is, I confess, an intriguing image, though I was left wondering how Her Majesty managed to manoeuvre the cab into the Royal Box. Perhaps it was able to ascend the stairway by means of a wheelchair ramp.
The Guardian's Mr Kim Fletcher concludes his piece by saying that the art of the billboard is contained in the phrase: "they lure you in and they let you down" - a maxim which has endless applications in modern life.
Thus, when I saw the attached billboard, I was curious, though not curious enough to purchase the Edinburgh Evening News. The dimensions of my various shames are too great to be addressed in a tabloid newspaper, but none of them, as far as I am aware, falls into the suggested category. Unless you count PE lessons in my pants. And the business with the history teacher during that summer of swimming lessons after which I received a certificate saying I had successfully swum for a total of four strokes (this being the maximum number of doggy paddles which an underweight boy can achieve before sinking).
Posted by Kirk Elder at 1:30 PM

They aren't what they used to be though. I remember the days when they were hand scrawled. Some poor lad living deep in the Scotsman offices spending all day writing the same phrase over and over. Perhaps a good profession for the grafitti arists from a pervious post of yours?

A favourite of mine, in directness rather than sentiment, was the Sun's(?) 'Gotcha' during the Falklands bash. Later adopted by Noel 'housewife's choice' Edmonds.

I was always tickled by the "massive jobs blow" one. Perhaps more than was justifiable, in fairness.

I find it hard to swallow that Mr Kirk Elder would ever have perfomed vigorous excercise within the confines of his underwear (or without for that matter) regardless of how many strokes he may or may not have taken in a public swimming pool.