Hell's Bells! The Grim Reaper Can Be Seen In The Shadow Of The Rev. John Knox 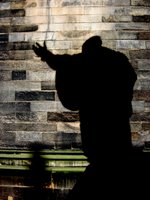 At my stage in life, it is wise to ignore portents, signs and symbols. They are, if one's mind is open to metaphor, everywhere. It is better, then, to carry on in the manner of the Roadrunner in a Bugs Bunny cartoon, not fearing cliffs, and running on into open air regardless.
Certainly, I was in a blue mood the other day, when I passed through Edinburgh on my way back from the funeral of the "King of the highlands" Mr Calum Kennedy. In order to add steel to my spirits I trudged up the mound to the Assembly Hall, where I hoped to pay tribute to the statue in the courtyard.
I had my Boots Beirette with me, and took a few pictures. It was a sunny day, and the statue looked appropriately forbidding. Then, gazing through the viewfinder, I found myself transfixed by the dark shape on the wall behind (see above).
I thought it then and I think it still. The Grim Reaper lurks in the shadow of the Rev John Knox.
Posted by Kirk Elder at 7:39 PM

but what's that at his feet, the little shadow directly beneath his hand? Is it K9, the Doctor's faithful companion? Or little Jack from the parliament, seeking scraps of wisdom and crumbs of gravitas?

A wonderfully atmospheric post Mr Elder. I can assure you however that as a good Presbyterian a place awaits you here in Heaven/Scarborough even if the Grimethorpe Reaper should call within the next day or two. Just don't go OTT on the Werthers Originals.