Ms Kirsty Wark Is One Of Our Finest Millionaire Newsreaders, But To The Hard-of-Hearing She Is More Noted As A Dada-ist Poet 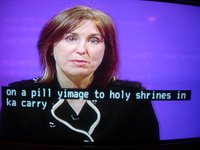 I yield to no one in my admiration of Ms Kirsty Wark. As a newsreader, she combines the matronly good looks of Ms Mary Marquis with the charisma of Miss Jean Brodie. She is a fan of Mr Roy Orbison. I have not seen her dance, but I would not be surprised to discover that she is an expert at the cha cha cha. 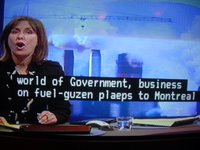 As is traditional in our petty wee country, she has been criticised: for sharing her holiday home in Mallorca with the First Minister, Mr "Wee" Jack McConnell (a lapse of taste, certainly, but not of principle), and for her part in the decision by which the Scottish parliament was housed in a concrete bunker with driftwood trim. Recently, Ms Wark earned £1m for selling her share in the television company which made educative works such as Wife Swap, in which members of the public agreed to look stupid for the entertainment of the broader public.
However, I am aware that Ms Wark's enunciation is a cause of some concern South of the border, where the poetry of the Scots tongue is less appreciated than it should be. As a thespian, I think Ms Wark suffers occasionally from lazy diction, with the result that listening to her reading the news is akin, sometimes, to over-hearing a re-enactment of a horse race commentary in the bar of the Crown Hotel, Portpatrick. Personally, I have no objection to this, but I understand that there are those who do not share my generosity of spirit. Some of these poor souls are housed in the BBC's subtitling department, where Ms Wark causes chaos with her fruity vowels and quickly chewed consonants, as these photographs show.
Posted by Kirk Elder at 1:18 PM

I see her only on Newsnight, where she is a whining besom.

I happen to have been on a pilyimage to ka carry, and found a tiny shrine to wee McConnell, made from matchsticks. it measured eight inches from top to toe, which I think is a touch larger than life.

Kirsty Wark's attempt at self-taught elocution might be considered less than totally successful. Her relatively modest financial achievements should be viewed with as much unenvying admiration as our fellow Scots can reasonably bear.