As The Scotsman's Most Loyal Reader Disappears, Is There A Conspiracy Of Statues? 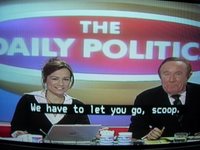 The disappearance of the Scotsman's most loyal reader - the brass man in the foyer of Barclay House (see comments below) - is, indeed, symbolic. It is is hard to resist the conclusion that it is, in some devious way, connected with the theft of My Henry Moore's Reclining Figure from Much Hadham in Hertfordshire, and the return of the 9ft statue of the First Mumbler, Mr Donald Dewar, to an elevated plinth in Glasgow.
But it brings to mind other questions about the few aspects of the Scotsman's heritage which survived the move from the paper's handsome warren in North Bridge to the shopping mall in Dumbiedykes where it now trades. Veterans of the move will recall how one of the many ex-editors had to plead for the custody of his antique furniture - carved with the paper's thistle emblem - only to see it removed by his successor, and replaced with white leather settees of the type advertised on television by Ms Linda Barker.
And what of the boardroom? In the paper's boom years, employees were often invited into this curious space with a balcony facing Salisbury Crags, to toast their latest sacrifice with a cup of warm wine. On one wall of the room was a portrait of the Barclay Brothers, one of whom was holding a copy of the Scotsman, painted at an odd perspective. It was a strange painting: a bit like a portrait of the artists Gilbert and George done in the Royal Impressionist style by that master of the wobbleboard, Mr Rolf Harris. Has it gone too? Or does it remain in the boardroom, keeping watch over Barclay House, its four eyes swivelling from side to side like a portrait of the Laughing Cavalier in a Hammer horror?
There was an American Indian head-dress in that room, too. No one ever knew why, though the feathery crown was worn by an assistant editor of the Scotsman during a heated argument with an ex-editor on the subject of Israel.
Looking back, as the pain recedes, these memories seem almost funny.
Posted by Kirk Elder at 10:43 AM

I was always under the impression that the Brass Man, rather than being Ert, was in fact a previous editor, whom staff had been told was "spending time in his garden" but had in fact been flash frozen in carbon like Han Solo in The Empire Strikes back. Opinion was divided on whether the fellow was a much-loved mubling Irish charmer or a blustering bully of a fella with Turets.
Rumour further had it that plans to immortalise Andrew Neil in similar fashion when the Twin tired of his japes, were cancelled because carbon moulding techniques had not advanced enough to replicate the 3million individual fronds making up his barnett.

Our erstwhile carbonite colleague may be no more, however in his place has appeared a lifesize replica of a cow made of bright red plastic. Whether this will be a permanent fixture is unknown (the choice of medium suggests it's radioactive half-life may be considerably less than that of cast bronze), however it has at least appeased the empty longing for an appropriate effigy to fill the vast atrium void. You couldn't make it up (and I assure you I haven't)

The person wearing an American Indian head-dress during the argument about Israel was an Executive Editor of the Scotsman, not an Assistant Editor.