On Edinburgh's Royal Mile, A Pink Bouquet For A Chubby, Toga-Wearing Hero Of The Enlightenment (Clue: Not Mr John Prescott) 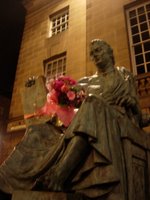 As if a vision of the Grim Reaper was not enough, my trip to Edinburgh involved a walk along the High Street, where I was able to inspect the tarmacadam which has been laid over the cobbles in order to make this historic highway a Formula One track for malevolent taxis and hormonal boys with "spoilers" on the tailfins of their Ford Escorts.
While I was there, two things happened. Both were reassuring in their way. First, I encountered the deceased highwayman, Mr Adam Lyall, leading a band of tourists through the closes of the Old Town. Many ghosts and ghouls walk these streets, and I feel cheated if I do not see one, if only to remind myself of the famous court case in which a man, enraged by the screams of the tourists on these haunted walks, emerged from his home waving a machete. The tourists, believing the man to be part of the tour, did nothing, until he gave chase, still waving his weapon. The poor fellow was jailed, but I trust that someone will write a folk song about him.
My second odd moment occurred at the statue of Mr David Hume, who stands guard outside the court at the top of the Mound. Mr Hume is a portly fellow, and somewhat under-dressed, which has led some to believe that enlightenment will be granted by rubbing his toenails as they pass.
But the other night, as this picture shows, Mr Hume was holding a bouquet of flowers. I could find no explanation for this, nor did any of the other passers-by find it remarkable.
I welcome suggestions as to why the flowers were there, but until I hear better, I will assume that they were a random act of beauty in an otherwise thankless world.
Posted by Kirk Elder at 3:00 PM

I believe this to be just another example of scholars' of Mr Hume's contempory philosphical opponents attempt at humour with a comical reference to his most famous work 'A treatise on the causation of hay fever'. In some dark book lined depth of Edinburgh University, they are laughing their heads off and breaking open the 25-year-old malt at this cutting rebuttal of Mr Humes atheistic theories.

I think that the flowers were in celebration of Mr Hume's Treatise on the Beauty and Complexity of the Waggle Dance of the Common Intellectual Honey Bee... And while you're at it if that Malt is Laphroig make mine a double!

as for the laphroigh, Mrs Cliff is rather partial to the Islay malts too. She tells me the laphroigh reminds her of the aroma of damp embers on a recently extinguished fire, and that the peat makes you live longer because just look at the conditition of some of these lads they pull out of Irish bogs from time to time. She also likes it because it's the only gallic name she can pronounce, if perhaps not actually spell.

I never touch the stuff myself in view of alcohol being the work of the devil.

apparently Hume has become a totem for the legions of shrieking hen parties who wobble up and down the Royal Mile dressed as poilcewomen or fat devils. The urban myth has formed that if they leave an offering, they will be blessed with a happy marriage. If his nipple is rubbed, one hears, there will be additional bounty in the form of a brace of children. This is true, oddly. Flowers are just the start...