I Am Justified And Ancient, This Is An Age Of Callowness And Youthful Idiocy, And That Is Why I Will Never Star In Doctor Who 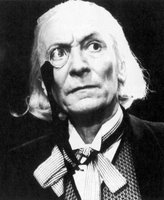 As a child, I was warned about ambition. My mother, Mrs Elder (or Ma'am), was of the belief that ambition rode in on a dark horse called Disappointment. "Disappointment is your friend," she would tell me, rapping my nose with a percussive spurtle. "Welcome him, or he will ride you to Hell."
It was, and remains, good advice. When one anticipates disappointment, the pain is diminished, though even by recognising this fact I wonder whether I am letting myself in for a terrible surprise. There was, I noticed this morning, only one magpie on the cedar tree.
My latest disappointment is the casting of Mr David Tennant as the Doctor in the television drama Doctor Who. It is not that he is unqualified for the role: as an actor he has some charisma, and the glib self-confidence that currently passes for talent. My objection is his age. He is approximately sixteen. He wears sandshoes. He looks as if he should be revising for his Modern Studies prelim, and not indulging in the unpredictable science of time travel.
There is, I confess, an element of pique in my observation. As a thespian of a certain age, one's horizons tend to narrow. The death of Mr Mike Baldwin on Coronation Street - from bewilderment, after a long bout of over-acting - is a typical fate.
But Time Lords should be different. They have travelled the universe, and can take any human form. In previous incarnations - Mr Willian Hartnell and Mr Jon Pertwee - the Doctor, if not exactly ancient, was at least allowed to have grey hair (as in politics, baldness seems to disqualify one from holding the position of a Time Lord).
But - foolish ambition - I cherished the fantasy that a thin man in damp tweed and a drop-brim trilby might one day take charge of the Tardis. Previous Doctors have been English eccentrics, with cricket jumpers, long scarves and straw boaters. Why not make the Doctor a Scot? We are, after all, famed for our calm bedside manner.
The Daleks, I recall, battled with kilted teuchters in the 1960s, and now it is done. The Doctor is of a Caledonian bent, though his accent comes from a polluted corner of the Thames estuary.
This is the disappointment I never anticipated: the realisation that I will never be a Time Lord.
The next Doctor, I predict, will be a girl.
Posted by Kirk Elder at 9:39 AM

The Tennant Boy seems harmless enough (though one laments that The Doctor should ever be described thus) but has a worrying bobby Adam's Apple that suggests character flaws and a nervy disposition. Also his is the walk of similar (but older) teens seen in Edinburgh's Lothian Road at 2am on a Saturday morning, as they strut like fighting bantams. I fear a burbery tardis.

Would a Dr Finlay or a Dr Cameron make a better Dr Who?

And Janet as the Billie Piper character?

I don't see it, myself - though Dr Snoddy would perform admirably as a dalek.

I believe Dr Cameron is always your man, no matter what the occasion or, indeed, the actor: both Mr Andrew Cruickshank and Mr Ian Bannen were paragons of wily certitude.

I fear he may yet hit puberty during his tenure as the good Doctor and therefore will go down as the first incumbent of the Tardis with a plooky fizzog..

I recall The Bannen Boy also had a thin neck. Is it a weak Scottish gene? It seems as a race Scots lads are either goose-necked or no-necked. It is of course a tiny blemish on an otherwise fine breed.

This takes me back to a Hootsmon splash headline which read 'Doctor who played God', back in the days when the paper was edited by a Ferrero Rocher